Social media is a bad bad place. Irrespective of your talent, stature or fame, if there is something that doesn't go by the trolls' standard, you are gonna get their piece of mind.

Social media is a bad bad place. Irrespective of your talent, stature or fame, if there is something that doesn't go by the trolls' standard, you are gonna get their piece of mind. Something similar happened with young Dangal star Zaira Wasim. So what if you have just given the biggest blockbuster in the history of Hindi cinema, so what if you have given one of the best performances of last year, you have to succumb to the senseless trolls of social media. After the release of Dangal, Zaira Wasim has become a youth icon of sorts for all Kashmiris and has been felicitated at several places. During that time she met J&K CM Mehbooba Mufti for which she received a lot of flak from trolls all across social media. She immedietly apologised for the same in her facebook post, she wrote, "I know that many people have been offended and displeased by my recent actions or by the people I have recently met. I want to apologise to all those people who I've unintentionally hurt and want them to know that I understand their sentiments, especially considering what has happened (in Kashmir) over the past six months." Also Read - Aamir Khan, Sara Ali Khan, Malaika Arora and more: 10 Celebs who faced netizens’ brutal trolling this week – view pics

She also added, "I hope people can also understand there are certain circumstances that emerge which one cannot control. I hope people still remember that I'm a just a 16-year-old girl and treat me accordingly. I'm sorry for what I did, but it was not a deliberate decision and I really hope people can forgive me." Also Read - Aamir Khan gets trolled for new firecrackers ad; BJP MP claims it's creating 'unrest among the Hindus'

But what caught our attention was the fact that she said she is not proud of what she's doing and shouldn't be considered as the role model. Here's what she said, "I am being projected as a role model for Kashmiri youth. I want to make it very clear that I do not want anyone to follow in my foot steps or even consider me a role model. I'm not proud of what I'm doing and I want everyone, especially the youth to know that there are real role models out there whether they be in this time or in our history." Also Read - Before Rahul Vaidya, THESE 9 Bollywood celebs received death threats for SHOCKING reasons

Does that mean she is not proud of her role in Dangal or her next Secret Superstar? Well that only she's gonna tell but later she deleted the post.

Check it out below: 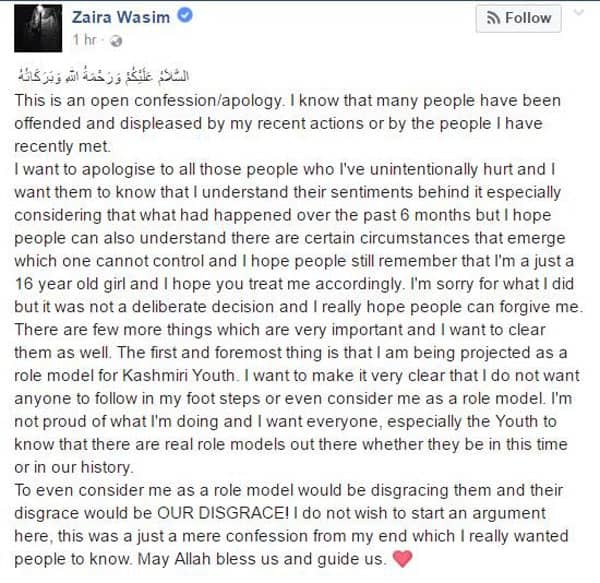 Later she posted another post asking that her apology not be blown out of proportion. Here's what she wrote, "Regarding my last post, I have no idea why this has become such a big issue. I just wanted to make sure that I did not hurt anyone’s feelings and all of a sudden it has turned into national news. Again and again, I am telling people that I have not been forced into anything by anyone. This was post was not meant against anyone, just wanted to make sure that people were not hurt by what I was doing. From media to everyone else, please don’t blow this out of proportion. Neither was I forced (to apologise) nor am I against anyone. Hopefully this post just stops this once and for all." Also read: Shocking! Chiranjeevi's Khaidi No.150's day 1 collection BEATS Aamir Khan's Dangal

Interestingaly she deleted this post as well. All we can say is cut the girl some slack people, she's just sixteen.