If you want to write an awesome scene to impress a Khan, make sure that it has a train and that they are defeating it! Also Read - From the emergence of Shah Rukh Khan, Salman Khan and Govinda to being offered the role of the hero's brother – Chunky Panday lists 5 reasons for his setback after 5 hits in a row [EXCLUSIVE]

Trains which have been a common form of transport for many in this country, has always been a subject of fascination for many film-makers! Many love have begun or ended in a train, (some even under a train, for that matter). Be it Jab We Met, Dilwale Dulhania Le Jayenge, Chennai Express, Burning Train - many Bollywood films have used trains to further their plot. Also Read - Happy birthday Sanjay Dutt: From Sadak to Khalnayak – the golden phase of Sanju Baba when he gave 16 hits before going to jail

However the three Khan's of Bollywood have a special fascination for India's most used vehicle - they want to defeat it! Yes, they have this crazy obsession of beating one of the fastest vehicles in the country (when it is running on time, that is!). Don't believe us? Well, we have some glaring evidence! Also Read - Did you know? James Bond actor Daniel Craig had auditioned for THIS Aamir Khan starrer

Recently we got to see a still from Sultan, where Salman Khan is seen running alongside a train, most probably as part of his training regimen. Actually he is running ahead of the train, so has he defeated the rain in the race of wheels and legs? Since it is Salman Khan, we can never know. If it had been Rajinikanth, we would have definitely known - nothing can beat Thalaiva!

Anyways here's the pic of Bhai beating and shaming a train in a race! 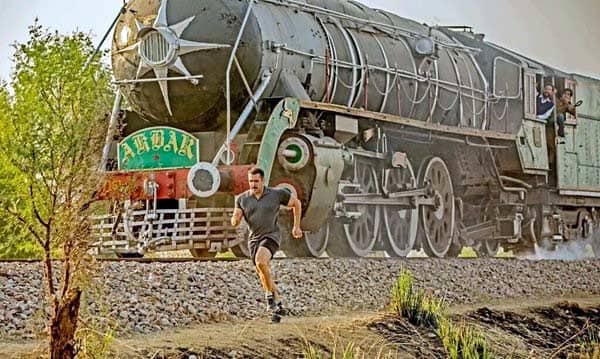 But this is not the first time Salman showed thenga to a train! Remember that iconic scene from Kick, where he cycles towards a railway track, jumps off the cycle and walks off nonchalantly just as the train brushes past him? Below is the reminder!

Bhai sure has a devil may care attitude towards trains...

And so does, his recent best friend, Shah Rukh Khan.

This is a man who has serenaded Malaika Arora (now not a Khan) and a train at the same time to the tunes of AR Rahman...but when he gets the chance, he never fails to 'shame' the train as seen in this brilliantly shot action sequence!

...On top of that, he even made Kajol run faster than the train so that she could be with him at the climax of DDLJ, when he could have easily pulled the chain!

Coming to the third Khan, everyone knows how Aamir Khan once DEFEATED the local train in a death-defying show of arrogance, so that he can impress Rani Mukerji (because that trip to Khandala wasn't enticing enough!). Here's the scene...

...But that's the only time when Aamir Khan tried to better the train and succeed at it! We have proof that he did it again to insult the 'snail' service of our trains, and here it is!