As Ranveer Singh conducted an interactive session with fans on Instagram, wifey Deepika Padukone asked him when he's 'coming home.

Ranveer Singh and Deepika Padukone are undeniably one of the most loved couples of the entertainment industry. While the duo often gives us major couple and relationship goals with their social media PDA, once again the beautiful couple won our hearts with their cute banter. The Takht actor kept an 'Ask Me Anything' session to interact with fans and we saw wifey Deepika crashing it and asked him “When are you coming home”? The actor gave an adorable yet witty reply as he wrote, “Khana Garam Kar Lo Baby, Main Abhi Buss Ponch Hi Rha Hoon.” with a kiss emoji. In the session, a fan asked Ranveer “One word for ur wifey?” To which he answered, “Queen”. Also Read - Jacqueline Fernandez starts shooting for a new project in Dubai; to star alongside THIS popular international star from 365 days – Exclusive 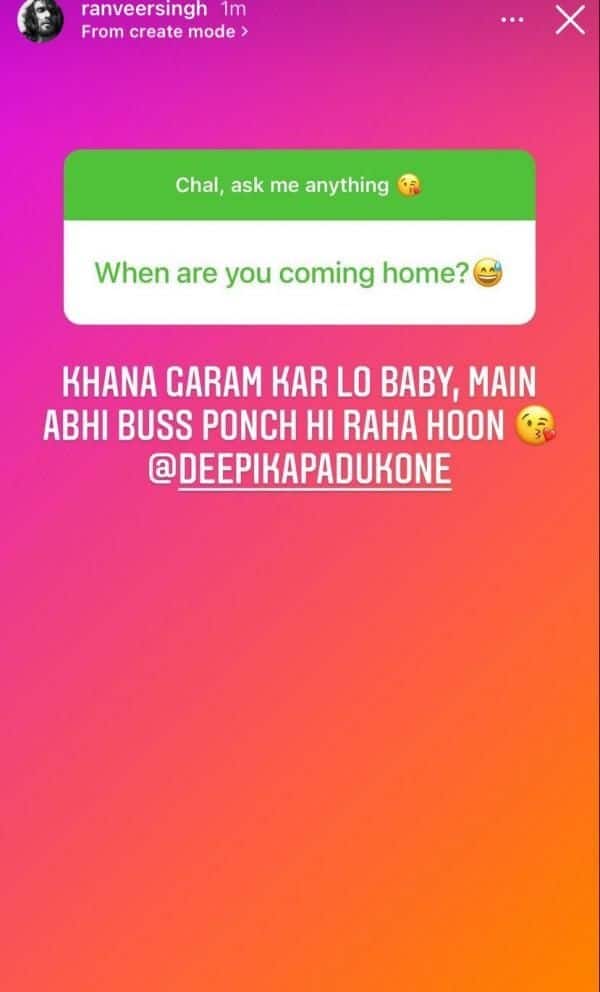 Talking about their professional front, the duo will share screen space in Kabir Khan's '83. Ranveer's wife Deepika is also playing reel-life better half in the film as she portrays the character of Romi Dev. Talking about the actress coming on board, director Kabir Khan told us, "I think the background, the fact that her dad, Prakash Padukone was a sports superstar, that influenced her very strongly. It wasn't because Deepika had agreed to do the film that I wrote the role. Deepika liked the role, and that's why she agreed to do the film. We never initially intended it that way (Deepika being a part of the film), and as Deepika said, there's a certain support role that the family plays, and I wanted to capture that, which is why I wrote the character of Romi, and when I narrated it to Deepika, I knew it was a small role. So, I said to Deepika, 'Just listen to the film. If you like it, you'll come on board, if not, you won't come on board. She heard the film, and she knew it was about the team and the boys and Kapil. But, she just loved the script and so, she came on board." Also Read - Ranveer Singh, Deepika Padukone steal hearts as they step out for lunch date with family – view pics