Deepika Padukone declared as the new Alia Bhatt and Rahul Gandhi on Twitter!

Deepika Padukone's Vogue empower video 'My Choice' is being discussed to no bounds. While a few are supporting her for empowering women, major section of the society is bashing her for promoting adultery on the name of 'women empowerment'. So much that she has also replaced Alia Bhatt and Rahul Gandhi, becoming the butt of jokes on Twitter. Yes! People have gone berserk labelling Dippy as the dumbest, most foolish, irrational, irresponsible, for have agreed to feature in such a 'feminist' video. Alia is wiser and Rahul empowers more women than Deepika, claim Twitteratis! Also Read - Rhea Chakraborty, Alia Bhatt, Disha Parmar and more celebs from Bollywood and Television industry were trolled this week – find out why

Here are some shocking tweets that I bring to you right here... Also Read - From Vijay Deverakonda to Rashmika Mandanna: THESE South biggies are set to amaze the B-Town audience with their Bollywood debuts

Let's start with Alia. After watching Deepika's video, Twitteratis now believe that Alia is more intelligent than Deepika... Also Read - From Golmaal Again to Saaho: Did you know Alia Bhatt had REJECTED these 5 films? 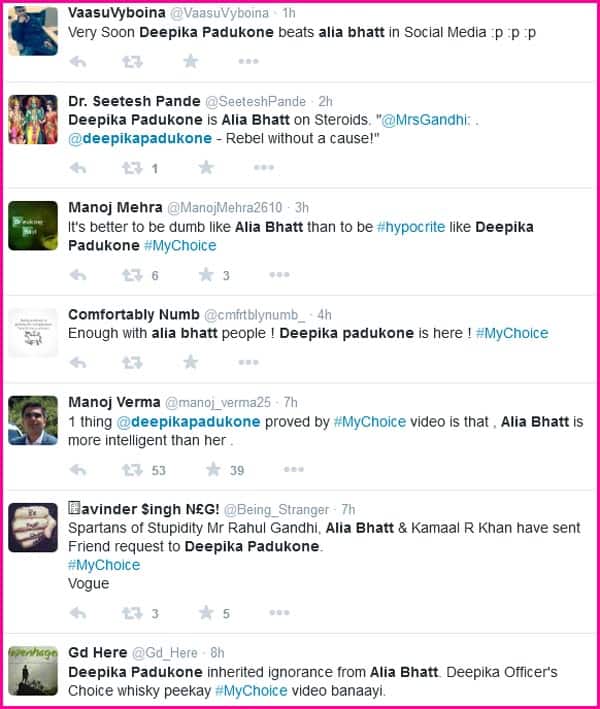 Rahul Gandhi wouldn't feel any better than this. Thanks to the video, he is now being tagged more responsible, than Dippy. HaHa, can you imagine? Boyfriend Ranveer Singh too has made it to the jokes. He can 'Do The Rex' with anyone now, if Dippy's 'choice' is anything to go by..

"My Choice is the reason why ex-boyfriend Ranbir Kapoor dumped Deepika?

After break up Deepika Padukone - Why ? Why you doing this to me ? Why you leaving me ? Ranbir Kapoor - #MyChoice

Dear @deepikapadukone --> Ranbir Kapoor is smart, he dumped u at the right time, im sure he must hv knwn ur #MyChoice side.