Deepika in Tamasha or Deepika in Bajirao Mastani - which look of hers do you like the most? Vote!

Decoding Deepika's brilliant sartorial sense from her Tamasha and Bajirao Mastani promotions, choose which look you like the most! Also Read - Deepika Padukone's Padmavati starts rolling on a musical note!

Deepika Padukone is much more than a mere eye candy. She has reinstated this fact with her diverse roles, versatile acting chops and strong stand on issues like mental health and objectification of women. Year 2015 is very eventful for Dippy as she is all set to scorch the screen with her two most awaited movies: Tamasha and Bajirao Mastani. Also Read - IIFA Awards 2016 LIVE: Priyanka Chopra's melodious singing will leave you AMAZED - watch video!

In Tamasha she plays a today's girl Tara alongside ex lover Ranbir Singh. Her dressing for the role mirrors her colourful, vibrant and versatile character. In Sanjay Leela Bhansali's Bajirao Mastani, she plays a 19th century warrior princess Mastani who is besotted by the powerful Maharashtrian Peshwa Bajirao. Deepika is running from pillar to post to promote both these films and naturally, she is seen sporting two drastically different styles. Also Read - Bajirao Mastani and Befikre have set Ranveer Singh APART from the rest of the actors, suggests trade expert!

Let us decode her both looks and then you tell us which one would you prefer. Give us a shout out in the comment section, we are waiting. 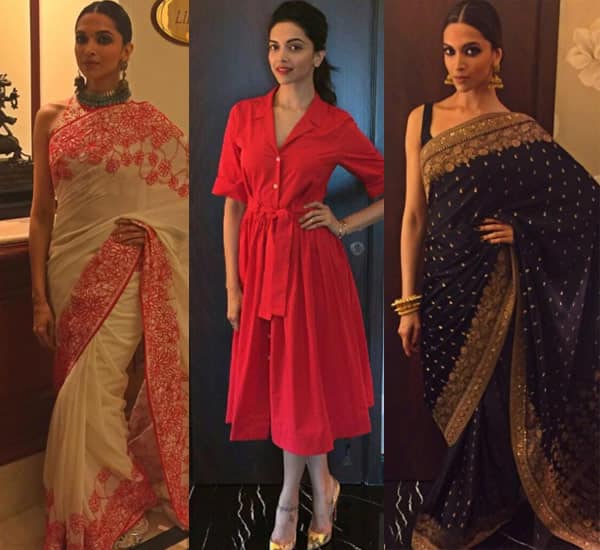 After Kareena Kapoor, Depeika perfectly aces the smokey eyes and bun look! We are in awe. Her look is replete with a lot of colours and oodles of spunk. Deepika donned a Payal Jain off white saree with beautiful red embroidery and teamed it with Aquamarine jewellery for her Tamasha Diwali party. Next, she was seen acing the saree look once more in Sabyasachi as she visited a high profile filmy Diwali bash. She retained her smokey eyes and middle partition!

Deepika is one of the few actresses who looks equally ravishing both in heavy-duty traditional wear and chic casuals. For one of her recent Tamasha event, she stunned by going casual on us. She sported a red shirt dress by Shift and slipped on dainty Christian Louboutin stilettos. A simple ponytail, red lip and minimal accessories completed her look. 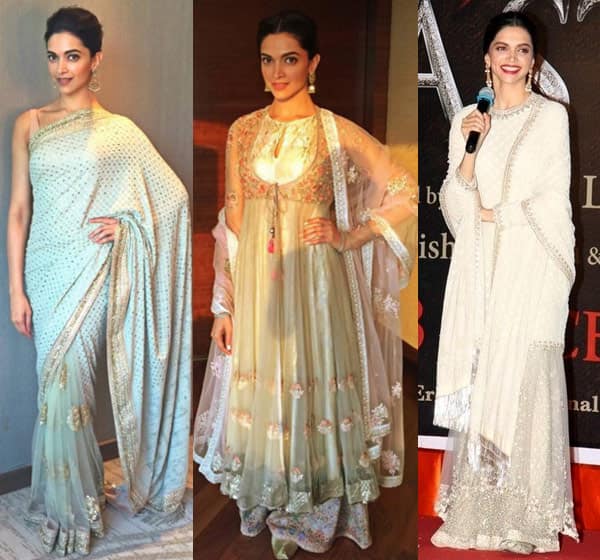 Master director is set to impress us once more with his brilliant theatrics, opulent sets and splendid clothes worn by his actors. Bajirao Mastani is a period drama and Deepika plays a 19th century warrior princess Mastani in this one. Bhansali has chosen a classy beige colour palate for her. Right from her first public event for the film to the last one, Deepika has been consistently wowing us with her subdued, understated and elegant sarees, lehengas and anarkalis.

The effect of Deepika's natural elegance coupled with Sabyasachi's vision is mesmerising. In the first image, Dippy has donned a lightly embellished cream and pink Sabya sareer with Amrapali earrings. In her latest promotional event, she again chose Sabya's off-white long kurti with Amrapali earrings and Tanishq ring and completely floored us. In centre, she has worn her Bajirao designer Anju Modi's creation. She went grand with her embellished layered anarkali to give new ethnic fashion goals!