Fans have been wondering why would Deepika Padukone put a picture with Ranbir Kapoor when she is happily married to the love of her life Ranveer Singh.

Deepika Padukone has changed her display picture on all her social media accounts, be it Facebook, Twitter or Instagram. And interestingly, they all feature her ex boyfriend Ranbir Kapoor. Fans have been wondering why would Deepika put a picture with Ranbir when she is happily married to the love of her life Ranveer Singh. Well, the answer very simple. Filmmaker Imtiaz Ali's romantic drama Tamasha has completed five years and Deepika has put her new DP with Ranbir to celebrate the occassion. Also Read - Fan asks Amitabh Bachchan the reason behind endorsing paan masala; here’s what the KBC 13 host replied

Putting the film poster featuring herself with Ranbir, Deepika used it as her display picture on all of her social media accounts. She also changed her name to her character name, Tara. Also Read - Deepika Padukone crashes Ranveer Singh's ‘AMA’ session to ask when he’s ‘coming home’ and his reply will melt your heart 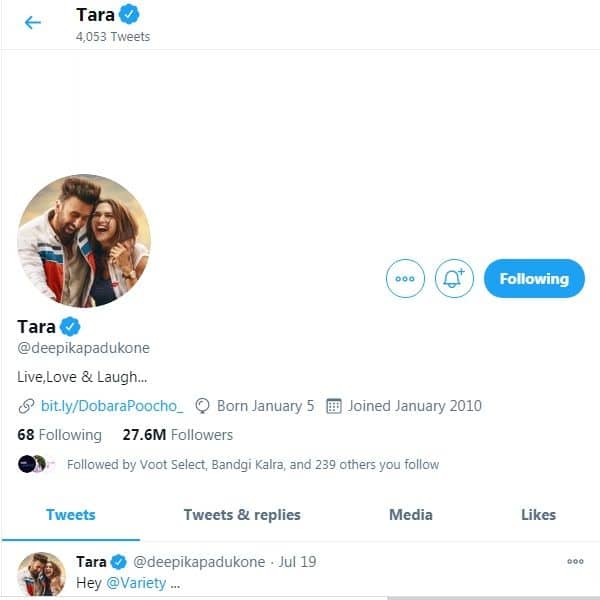 Imtiaz Ali is one of those filmmakers, who has always conveyed a love story differently and won our hearts. And one of his under-rated gems is Ranbir Kapoor and Deepika Padukone's Tamasha. While the film failed to create any magic at the box office during its release, over the years it has achieved a cult status, especially among the youth.

Undoubtedly, we can't imagine any other actor-actress as Ved and Tara bud it will amaze you to know that Deepika was not the first choice for the film? Yeah, you read it right. Imtiaz had first approached Anushka for the lead character but she rejected the offer as she said that Tara's role wasn't meaty enough.

Tamasha also holds a special place in Deepika and Ranbir's heart since it was their first film after break-up. It was the third time that the duo had been paired against each other. They had earlier come together for Bachna Ae Haseeno and Yeh Jawaani Hai Deewaani.

The film follows the lives of Ved and Tara who accidentally meet in Corsica, France and spend the next few days together. They later meet again and Tara helps Ved find his true self after getting lost and changing himself under societal pressures.

Tamasha was inspired by Rumi’s quote, "Don't be satisfied with the stories that come before you. Unfold your own myth." That also fits with the film's tagline, "Why always the same story?”

Imtiaz too had spoken about what made him come up with the project and had said, “In front of people, we all have to behave in a certain way, we are in some character. We can’t be who we are. I had this thought even as a kid. I think it’s coming from there.” Though the movie didn’t fare well at the box office, Ranbir and Deepika’s amazing performance left us impressed. In fact, their chemistry is the reason which created the huge buzz for the movie.