Deepika Padukone and Ranbir Kapoor were in a relationship for nearly two years until they decided to part ways and move on in their lives.

Rishi Kapoor and his wife Neetu are in New York for the veteran actor's treatment for his illness. Last year before heading to the United States, the Mulk actor had informed his fans about the same and requested people to not speculate about his undisclosed illness. However, some reports suggested that Rishi Kapoor was suffering from cancer. It was only recently when the actor himself opened up about his battle against the ugly c and also revealed that he is now cancer- free. While we wait for him to return India, Deepika Padukone, who had flown down for the Met Gala, managed to sneak in some time and paid a visit to him and Neetu Kapoor. Also Read - Deepika Padukone is The Family Man 2 actress Samantha Akkineni's fashion inspiration and these pictures are PROOF

Such a fun evening with adorable @deepikapadukone .. gave lot of love n warmth ??

Given the history DP and Ranbir Kapoor share, it was heartwarming to see the actress share an evening of love and warmth with his parents. Extremely happy and touched by the Padmaavat actress' sweet gesture, Neetu and her daughter Riddhima gifted Deepika a lovely and beautiful bracelet. The actress posted a picture of it on her Instagram story with a caption that read, "blessings & good wishes." Also Read - After DECLARING Shah Rukh Khan as India, Tom Hiddleston aka Loki reveals the movie which made him a diehard fan of SRK 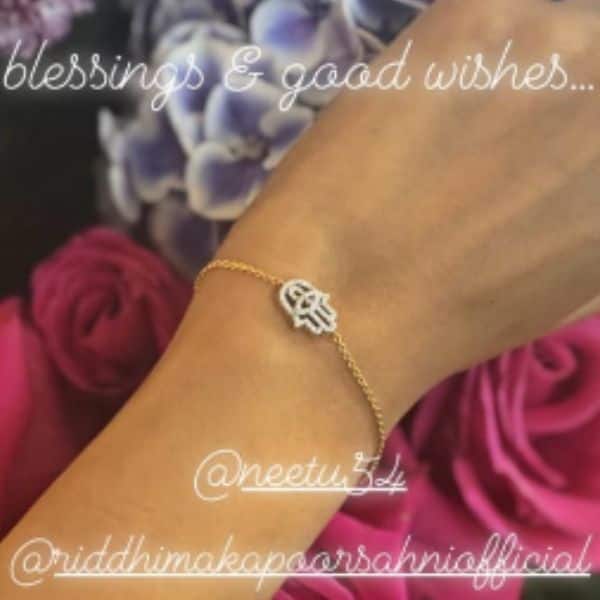 This is extremely pretty, isn't it? Deepika and Ranbir Kapoor were in a relationship for nearly two years until they decided to part ways and move on in their lives. DP and Ranbir didn't let their break-up affect their professional life. The duo didn't shy away from working with each other and delivered good films like Yeh Jawani Hai Deewani and Tamasha. Today, both Ranbir and Deepika are more like friends and comfortable in each other's company.

On Karan Johar's chat show, she had shed light on her current equation with the Rockstar actor saying, "I think it only gets better and I think it couldn’t have gotten better. I couldn’t have asked for anything more. I think the relationship we share today is what I value the most and I don’t think it could have been in a better place."

Even after her marriage to Ranveer Singh, the actress appeared in a commercial with the Kapoor lad and their chemistry was too cute for words. While Deepika is happily married to Ranveer now, Ranbir Kapoor, on the other hand, is currently dating Alia Bhatt.

On the work front, Deepika will next be seen in Meghna Gulzar's Chhapaak.