Deepika Padukone and Katrina Kaif are two of the most talented actresses we have in the industry. Though they are contemporaries of each other, that hardly seems to affect them. Katrina uploaded a picture on her social handle and Deepika Padukone spoke out our thoughts when she commented.

Deepika Padukone and Katrina Kaif are two of the most talented actresses we have in the industry. Though they are contemporaries of each other, that hardly seems to affect them now. Deepika and Katrina have dated Ranbir Kapoor in the past, they wouldn't see eye to eye a few years back but now it seems that they have buried the hatchet. Well, both the beauties are on Instagram and they are totally ruling it in their own way. Both the actress follow each other on Instagram and often like and comment on the pictures. Today, something of the same kind has happened. Katrina shared a picture with a hairstylist Amit Thakur and captioned the image, "भैया and me ?" Have a look at her picture here: Also Read - Deepika Padukone, Samantha Ruth Prabhu, Hrithik Roshan and other Top celebrities who have suffered from severe health issues

We must say, Katrina sans make-up looks fresh as a daisy in this picture and we fail to understand how can one look so hot even in an unedited and simple selfie. Deepika voiced our thoughts. The actress commented on Katrina's post and we couldn't agree more with what DeePee had to say! She wrote, "Too much hotness in one frame?!!!@katrinakaif @amitthakur_hair." Have a look at Deepika's comment here: Also Read - WTF Wednesday: ‘Are you pregnant?’ Dear fans, stop asking women in Bollywood and TV this cliché question 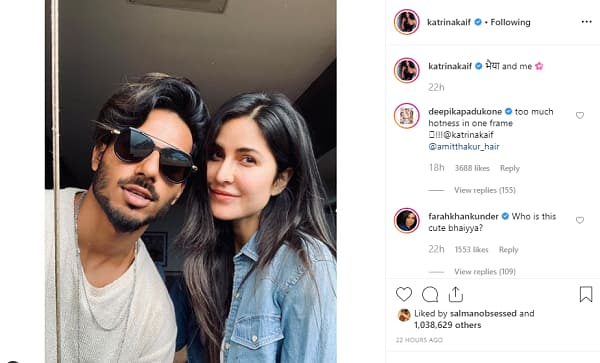 Ranveer Singh and Deepika Padukone will make you gush with their shuddh desi; romance

Also Read - After getting trolled for his 'old' and 'out of shape' look, Prabhas' new suave avatar goes viral 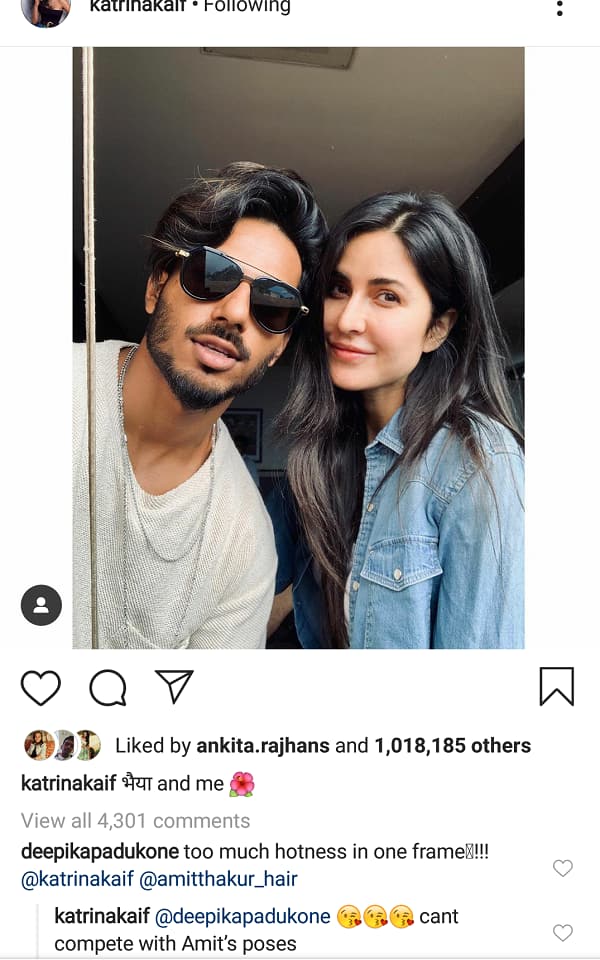 Aren't these two cute? Well, we hope this saga of friendship continues and one fine day, we may even get to see them both share the screen space together. Meanwhile, Katrina and Deepika are busy with their respective projects. Katrina is currently basking in the success of Bharat. She played Kumud Raina aka Madam Sir to Salman Khan's Bharat. The actress is prepping for her role in Rohit Shetty's cop-verse, Sooryavanshi. Katrina will reunite with Akshay Kumar in the film after 9 long years. Talking about her reunion with Akshay and her first film with Rohit Shetty, Katrina told PTI, "It is lovely to be working with Akshay. I have known him for a long time. Rohit is very clear about what he wants from this film. There is a science behind this film and it is meticulously and thoughtfully done."

Deepika Padukone, on the other hand, has wrapped up Meghna Gulzar's Chhapaak. The story of the film is based on the life of acid attack survivor, Laxmi Agarwal. DP will also be seen in '83, alongside her real-life husband and actor Ranveer Singh. She will play wife to Ranveer's Kapil Dev on screen as well.

Anyway, what do you think about Deepika and Katrina's budding friendship? We totally love it. Let us know your thoughts by tweeting to us @bollywood_life.