It's true that Tubelight is not performing well, which is something you don't expect from a Salman Khan film. When was the last time anyone associated disappointment with his films? We don't remember that because Bhai has delivered consecutive successes. Even with Tubelight, he managed to do something that no one else could. Today, the film has made over Rs 105 crore, and by doing so it has become Salman Khan's 11th consecutive film to touch that number. Also Read - Bigg Boss 15 OTT: Bajre Da Sitta singer Neha Bhasin is the first confirmed contestant of the show

For once, keep the number of days that the film took to do so, aside, and think as to how many actors can claim to have 11 Rs 100 crore films and that too back-to-back? Only Salman Khan! Yes, Tubelight was a Eid release and despite nearing the end of the first week soon, it has only just managed to score Rs 100 crore. But then the film is unlike a Salman Khan film. First, it's a remake of a Little Boy which had a kid in the main lead. The remake however had a 51-year old man playing a slow learner, that obviously didn't go down well with the crowd. Next the actor didn't play to the galleries and did nothing to please his fans with his regular antics. Thus the film failed to get footfalls at the box office. But despite all that, Salman Khan has still delivered another Rs 100 crore fest with this film. That says a lot about what this man can do even with a lackluster movie.

Salman's Rs 100 crore tally began with Dabangg and since then, he has lodged one in that category with all his releases. Bajrangi Bhaijaan is his biggest hit till date with over Rs 320 crore at the box office while Sultan takes the second spot. Check out the list of his 11 box office wonders right here... Also Read - Bigg Boss 15 OTT: Aastha Gill, Raqesh Bapat, Rohit Reddy, Neha Marda, Divya Agarwal and more to participate in Karan Johar's show? Check complete list of contestants 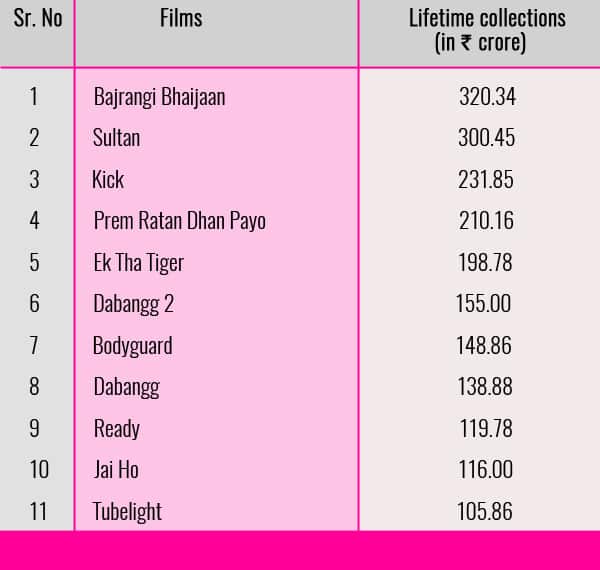 So, just like Fan failed Shah Rukh Khan, Tubelight failed to encash on the superstardom of Salman Khan. Don't judge him!