Dhanush NOT the son of Madurai couple confirm medical reports

Dhanush is in the clear, reports confirm he is not the son of Madurai couple.

This will come as a great relief for all Dhanush fans out there - the actor has been cleared off all alleged claims of being a Madurai's couple's son. As per reports on Quint the medical reports have been cleared, two-court appointed doctors who examined the actor have confirmed that the claimed identification marks were not seen on his body. One of the doctors who examined stated the following while speaking with News Minute - “There are no marks on his body, and we have also stated clearly that if there was any attempt to remove a mole, there would be marks, and that there is no possibility of removing a scar without traces.” Also Read - South News Weekly Rewind: Prabhas to hike his fee for Dil Raju's ambitious film, Dhanush announces his first pan-India film and more

As per reports, the court had asked the doctor involved in this case three specific questions - Does Dhanush have the claimed body marks? Is it possible to remove these body marks through surgery? If the removal surgery had been conducted, would there be any trace or proof? The doctors have submitted a report answering the three questions. Each of the responses go against the claim of of Kathiresan and Meenakshi, the couple who claimed that Dhanush was their son. As for Dhanush, he has stated that he is son of R. Krishnamoorthy and K. Vijayalakshmi born on July 28, 1983 in Chennai. The case reportedly has been now adjourned to 27th March, 2017. Also Read - What to Watch today on Netflix, Amazon Prime, Disney+ Hotstar and Apple TV+: Jagame Thandhiram, Elite season 4, Sherni, Luca and Physical 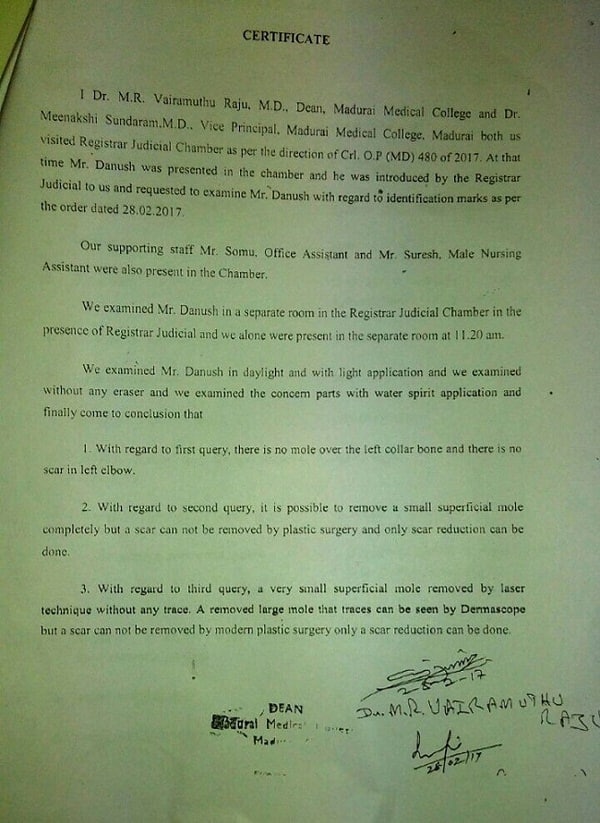 It was in November last year when the couple filed a case claiming Dhanush was actually their son Kalaichelvan. He apparently ran off from college to pursue films. They were demanding a maintenance fee of Rs 65,000 from the actor.

In other news, fans are eagerly awaiting the release of Dhanush's directorial debut - Power Paandi. The music album composed by Sean Roldan has already received rave reviews. The movie is all set to release on April 14th. The film stars Raj Kiran in the lead role, stars Madonna Sebastian and also the actor himself in cameo appearances.