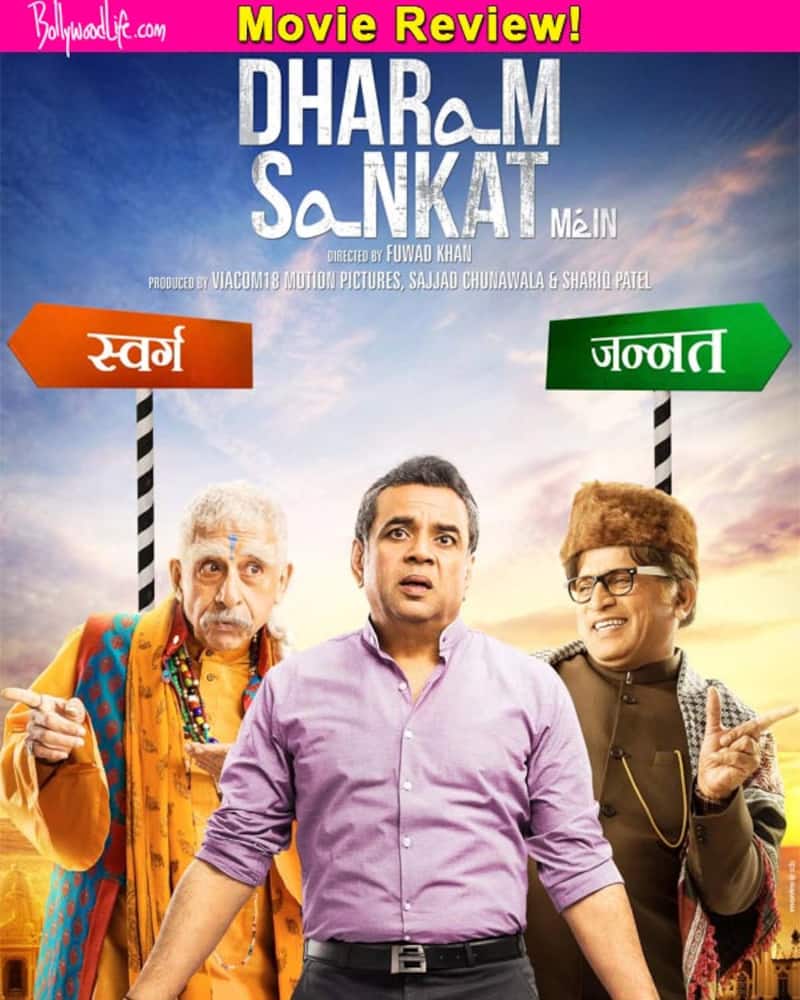 Religious satires do well with Bollywood audiences, but was this film worth the effort? Check out the full movie review and you would know...

For a movie that professed in all its promotionals, "From the studio that brought you OMG!Oh My God", people had high expectations from this film. And the faith got even higher when you saw three stellar actors like Paresh Rawal, Naseeruddin Shah and Annu Kapoor in the film. But was the movie able to live up to all of that? Also Read - Akshay Kumar-Suniel Shetty give a MAJOR hint about Hera Pheri? Fans can't keep calm [View Tweets]

Just like many others, I too went for the press show having high hopes from this film. The numerous number of times people were checking into their cell phones made me realise how impatient most of them were becoming for the film. But once it started, there was not a very different scenario. Read on to find out why I say so.... Also Read - Brahmastra: Before Ranbir Kapoor and Alia Bhatt starrer, revisit Akshay Kumar, Sunny Deol and other actors' movies that celebrated Hindu mythology

Whats it about Also Read - Hera Pheri 3: Fans of Akshay Kumar-Suniel Shetty's cult film can rejoice as Firoz Nadiadwala-Anand Pandit to team up?

Paresh Rawal is a full bred brahmin Hindu who has all his life blamed Muslims for terrorism and other evils in the society. Suddenly after opening his dead mother's locker he gets to know that he was adopted. On doing some research he finds out that his biological parents were Muslim. With some help from Annu Kapoor, he finds out that his biological father is still alive and ailing at a Muslim old age home. Paresh goes there to meet him but is asked by the Imam to learn Muslim norms and come back if he wants to meet his father. Thus starts the funny tale about how Paresh copes up with his Muslim self.

Also there is a side track where Paresh's son wants to get married to a girl whose father is a staunch follower of a Hindu guru Neelanand (Naseeruddin Shah). So because of his son, Paresh starts brushing up his Hindu religious side as well.

It is this predicament in Paresh's life that forms the basis of the whole story. What happens to him next is where the funny satire lies!

Paresh Rawal truly carries the film on his shoulders. He has done that in the past as well and he does well in this film also.

Apart from him a couple of songs from the film sung by Gippy Grewal were dance worthy and the audiences were seen enjoying. I could see people whistling to them so I took it that they really loved it.

Paresh Rawal's acting was just not enough. Paresh is supposed to be the funny confused guy in such films, but he is playing a more serious role which doesn't suit him at all these days.

Where was Naseeruddin Shah in the film? He barely came on for a couple of scenes here and there and that was it. He hardly had screen space in the film. His outlook was like Saint Gurmeet Ram Rahim Singh Ji Insaan but the writers could have made his character more funny, which they sadly didn't.

Annu Kapoor started off being funny, but right after the first scene finishes he turns into this caring and loving neighbour and thereby not mouthing any more funny one liners. He did great in the little screen time that he had, but when you have someone having a funny bone like Annu Kapoor, you just need to tap into that harder. His jokes fell apart and didn't make you laugh after a first few minutes.

The direction was directionless. Fuwad Khan wanted to make a film which gave out a socially relevant message and talk about religion at the same time, but he failed miserably at both. Right from the beginning the film was pointless. A grown 50 year old man dancing in the bathroom to a Punjabi rock song in the early morning—Pointless. Him trying to learn how to speak proper Hindi with a touch of Urdu in it—Pointless. Confusing a Hindu Pundit and giving him salutations like a Muslim man has been done to death—Pointless. Jokes on long names have been done numerous times in the past with south Indians. Why do that again with a Muslim character having a five fold name? Pointless.

The background score was not just pointless but even worthless. In scenes where the music should have been on a thoughtful and repentive mode, a happy tune was playing. Why?

Getting to the locales of the film, they have been shot mostly in Ahmedabad. A place which hasn't been featured that many times in Bollywood films. So when you have that uniqueness in your film, you should milk it nicely. You should make your script such that the locales are seen more and audiences are treated to some fresh places. But instead what do you do? You end up showing the outdoor locales in just some crappy sad songs. Like Wow!

Dharam Sankat Mein is a YAWN FEST. Despite having such a heavy star cast, the film fails to impress. Being a satire it falls flat at making you laugh because of its bad script and shoddy direction.