Deepika Padukone's latest fashion outing at the airport is super drab. Check out her pics!

Deepika Padukone has done it again. She was spotted at the airport, wearing a nature-esque Gucci ensemble with pumps that look a lot like pyjamas! Wow, just when we thought that her style game was getting back on track, she has done it again. The diva had visited the neighbouring country (and by that we mean China) to promote her film, xXx: Return of Xander Cage with Vin Diesel. Although as she left for the event and even at the promotions, we saw her make some really chic appearances. But alas, it all went for a toss as she returned wearing this outfit by Gucci and paired with pumps! We remember in the past too, she had walked out for an event wearing a satin PJ but it had more class, panache and a bit of a risque factor. To be precise, it was during IIFA 2016 last year when she wore it. We weren't really big fan of it back then as well. But atleast it didn't make us cringe as much as this outfit has. The outfit has given us Friday Blues (if that's really a thing). Also Read - Rishi Kapoor returns home after 11 months 11 days, expresses gratitude for all the love and support

It is quite shocking that after turning up with some fashionable looks at the airport, DP has dropped the standard of her fashion with one wrong move. Although this ensemble is a rage in China, the actress shouldn't have picked it up, especially when not styled right. We are supremely let down by her choice as it doesn't suit her and just makes her look odd and out of place. Except for her smile, there's nothing flattering about this look. I specifically despise the red linings given to the cloth. Check out her pics below. (ALSO READ - Deepika's topknot from xXx:Return Of Xander Cage's Beijing premiere gives an impression of a fierce princess ready to claim her throne) Also Read - Janhvi Kapoor calls Smriti Irani 'Aunty' and latter's reaction is unmissable - watch video 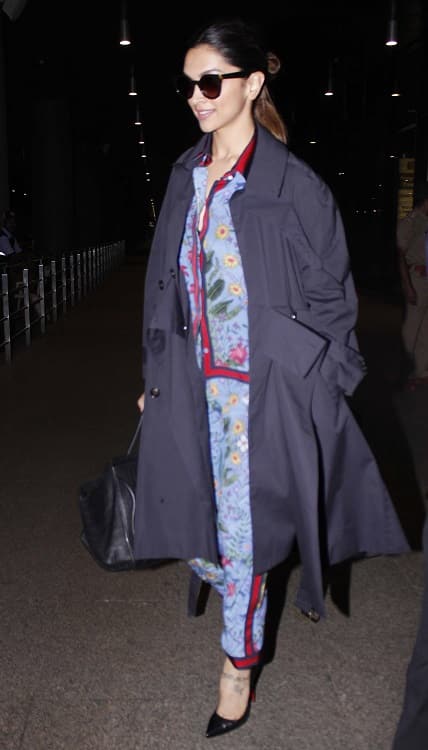 Also Read - [HQ Pics] It's happening! Deepika Padukone-Ranveer Singh jet off to Italy for their Lake Como wedding; twin in white at the airport 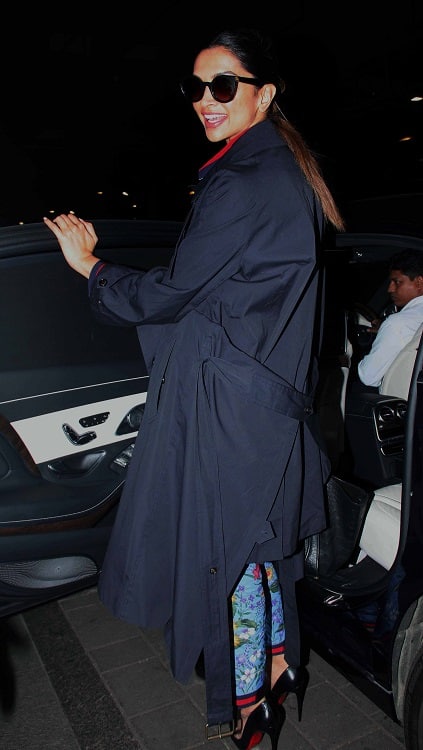 Just yesterday, she was spotted looking like a warrior princess in a gorgeous Ralph Lauren ensemble. What made her look more interesting was her hairdo. The topknot was fiercely sexy in the chic outfit. This whole look itself was a big winner. We liked it quite a lot. Even as she left for Beijing, the diva had worn a cute grey short dress with a Givenchy bomber jacket and thigh high boots. The look was very easy going and definitely brought out the best of DP. But clearly, nothing lasts forever. The actress' this ensemble is so not cool. Maybe if she could tone down the look by either ditching the navy blue long jacket or the pumps with a lot of variation, it might've had a bit of a scope. (ALSO READ - Deepika Padukone wears 'LOVE' on her sleeves while Kriti Sanon channels Alia Bhatt - view HQ pics)

We'll see her next in Padmavati starring opposite Shahid Kapoor and Ranveer Singh. Just like her fashion game, even the controversies surrounding the Sanjay Leela Bhansali film have been in the news for all the wrong reasons. The movie has been scrutinised by the Karni Sena even before the shooting came to an end. Perhaps its tough luck SLB has to live with for all his movies before they hit the big screens. Anyway, Padmavati is slated to release in November this year. With the recent Jaipur fiasco, we wonder how much it has affected the schedule of the film.

Stay tuned to this space for hot scoop and latest updates. Oh and do tell us your thoughts on her ensemble in the comments section below.