Priyanka Chopra and Nick Jonas welcomed a baby girl recently. A couple of pictures are going viral on the gram as the couple's daughter. However, here's the truth behind the viral pictures.

Priyanka Chopra and Nick Jonas revealed that they have welcomed a baby on Friday, late at night. Priyanka and Nick took everyone by a surprise by announcing that they have welcomed a baby via surrogacy. The two newbie parents are currently busy taking care of their newborn daughter. Meanwhile, a couple of pictures of Nick Jonas and Priyanka Chopra with kids are going viral. And it is being said that the pictures are of their newborn daughter. However, we are here to tell you the truth. A couple of pictures of Priyanka and Nick with their niece Krishna Sky are being shared around as their baby. Check out the pictures below: Also Read - Priyanka Chopra's hubby Nick Jonas talks about daughter Malti for the first time; says, 'Life is beautiful, she is a gift'

The pictures that you see in the above two posts are Krishna Sky Sarkisian and Aydin. The two are nephews of Priyanka and Nick. While Krishna is baby of Priyanka's cousin Divya Jyoti and Nile whereas Aydin is the son of Stace and Irfan. That's not it, more pictures are going viral when the paparazzi had shared pictures of PeeCee and Nick with kids. A picture of Priyanka holding a baby and Nick caressing the baby has been shared. To tell you the truth, it is a picture from 2018, after their wedding, it seems. The picture features Priyanka and Nick playing with one of the guests' baby. Check out the picture here: Also Read - Trending celeb pics of the day: Priyanka Chopra and Nick Jonas kiss in public, Shehnaaz Gill's sizzling avatar in black dress and more 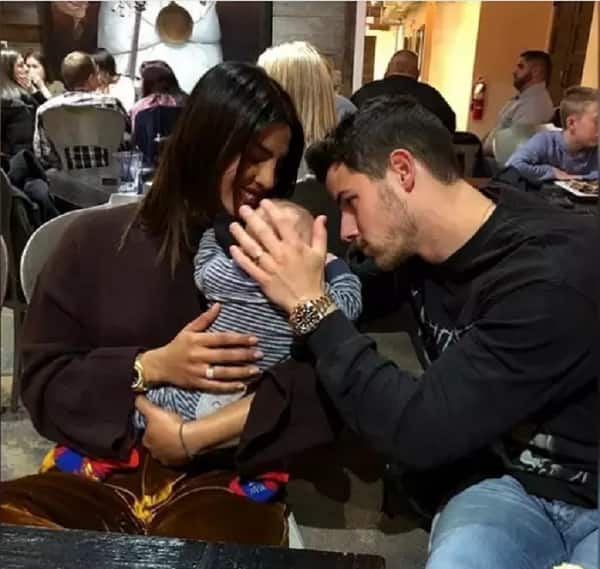 Moreover, a screengrab has been also shared as the picture of Priyanka Chopra and Nick Jonas' newborn daughter. It is from an old video wherein, she is playing with Krishna. Check out the video below:

Priyanka Chopra and Nick Jonas haven't shared the pictures of their baby yet. And these are old posts that are going viral. The two announced the arrival of their baby on Friday, late at night.