Did Shahrukh Khan show disrespect to the Indian flag? 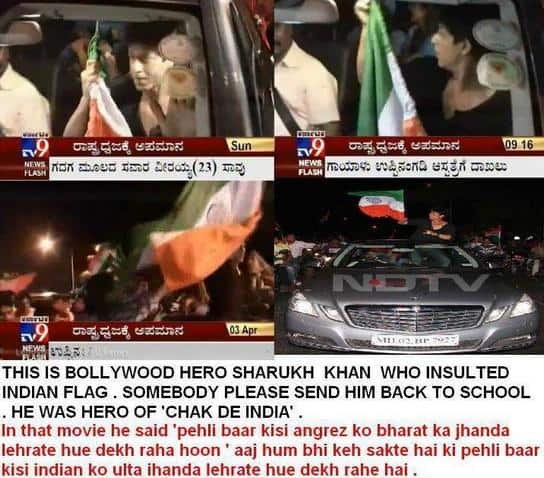 Call it coincidence, but on the eve of Republic Day, we found some images of Shahrukh Khan on Facebook that clearly shows him holding the Indian tricolour upside down. Does that mean Shahrukh has shown disrespect, or is this his way of revering the Indian flag? Apparently, this outing of Shahrukh was after India won the cricket World Cup 2011. And in the excitement, he forgot that he was holding the flag with the wrong colour appearing on top. The correct order is saffron, white and green. Has SRK deliberately done this, or is it just an honest mistake, as he gets carried away in his attempt to honour the Indian flag after the cricket team’s victory? What do you think? Also Read - 5 Blockbusters, 8 Hits, 1 Superhit – How Shah Rukh Khan continued as the undisputed KING of the box office in the 2000s; leaving Salman, Ajay, Aamir, Akshay miles behind

Facebook is riddled with anti-SRK comments under the picture collage of a news channel. Don’t believe the images? Here’s a link to the YouTube video where it is clear that SRK has made a big mistake, the kind not expected from him after his nationalistic films like Phir Bhi Dil Hai Hindustani, Swades and Chak De! India. Watch it and enter your opinion in the poll below! Also Read - Shah Rukh Khan's character Kabir Khan from Chak De India trends as India’s women’s hockey team reach the semis at Tokyo Olympics – see Twitter reactions