Like the casting of Fawad Khan in Ae Dil Hai Mushkil, even Ajay Devgn nearly cast a Pakistani actor in Shivaay.

Ajay Devgn is being applauded by many for his stand on banning Pakistani artistes and he even said that he can't work with any of them until the situation between the two countries is under control. When he was asked if he will work with Pakistani artistes in the future, Ajay Devgn said, “Not at the moment. Country comes before money if the country breaks into mess what will we do with the money.” Ajay Devgn made his stand loud and clear. Even when few days ago there was news that a Pakistani actress was a part of Shivaay, the makers refuted the claims as plain rumours, in a press release but here is a detail which most have missed. India's relation may have gone worse with Pakistan in last two weeks but there was a time when Ajay Devgn had almost casted a Pakistan born Canadian actor Ali Kazmi in his upcoming magnum opus. Yes, as per reports Ali Kazmi was supposed to do Shivaay, and even was supposed to shoot for the same in Canada but due to scheduling conflicts Ajay Devgn couldn't shoot in Canada and hence makers had to let go Ali Kazmi from the film. Also Read - Tuesday Trivia: Did you know Aishwarya Rai’s daughter Aaradhya Bachchan once thought Ranbir Kapoor was her father and also had a huge crush on him?

Ali Kazmi is known for his work in TV series like Dependables. He was also a part of Diljit Dosanjh's Sardaar Ji and Deepa Mehta's Beeba Boys, in which Randeep Hooda played the main lead. The below is his IMDB page... Also Read - 5 times Shah Rukh Khan charmed us with his surprising cameos in these Bollywood films 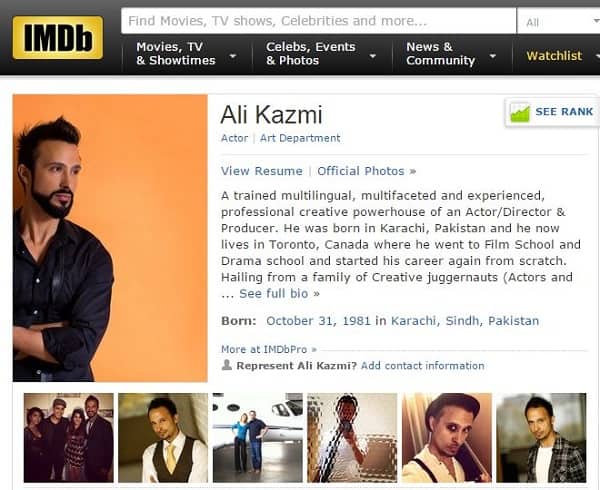 The actor was supposed to be cast in the film, when the unit of Shivaay was supposed to shoot certain sequences in Canada. In an interview with Images, Kazmi spoke about how he missed his opportunity to work with Ajay Devgn as the unit did not shoot in canada as planned. He said, "It's mainly due to them not filming in Canada and their schedule getting majorly delayed. I was occupied with shooting Dobara Phir Se so I couldn't go where they were, so the location and dates didn't work out for me." As per our sources, Shivaay could not be shot there because they could not find the right location.

When Ajay Devgn was asked during an interview about the boycott of Pakistani actors, he said, “You can’t clap with one hand. Talks have been going on. You keep talking to people but then they come kill you. How can you still continue a dialogue? I want to see you getting into a fight with somebody and after he gives you a tight slap on your face, let’s have a talk. What will your reaction be instantly to retaliate or talk?”

I guess Shivaay just had a lucky escape. But one wonders what would've been Ajay Devgn's stand if he Ali Kazmi indeed had shot for his part, then like Ae Dil Hai Mushkil, Shivaay would also had faced the ire or perhaps may be not, no one would have bothered much, since Ali Kazmi is not as popular in India as Fawad Khan. After all, Mirzya had the renowned Pakistani born artiste, Art Malik, playing Saiyami Kher's father and yet no one bothered to jinx its release.