As bizarre as it may sound, Rishi Kapoor once wore ladies' pants unintentionally for one of his earlier songs. The veteran actor, who's otherwise quite vocal about different issues and doesn't hesitate to put forth his views, was honest enough to accept his mistake. The story behind this is as fascinating as the incident itself. So while Rishi Kapoor was shooting for the O Hansini song from Zehreela Insaan with Moushumi Chatterjee, his fashion dresser noticed something irregular in the actor's trousers. The actor, who was earlier unaware of the faux pas, continued to shoot in the same pair of trousers only to realise the goof up later. Also Read: Rishi Kapoor lashes out at a ‘bad’ cartoon about fire at RK Studios Also Read - Shalmali Kholgade: A musician has to send visual cues to their listeners to have character to their music

The era when Rishi Kapoor marked his debut in the film industry was the one where stars took efforts to style their on-screen characters and this included styling themselves for the same. Though Rishi regrets signing his second movie, Zehreela Insaan, as that was something very drastic after Bobby, he does recall a very fond memory from the same. The actor was always obsessed with shopping for his own clothes for shooting. And during one of his visits to Beirut, he was fascinated with tight-fitting flared pants. Rishi loved the pair of pants so much so that he decided to wear it in the song. It was only later when the dress man pointed out that its zip was to the side and not in front, did he realise the folly. He recalled how he had made a fashion boo-boo, picking up a ladies' trouser. Now that's an interesting story to recall, right? Also Read: 5 films that prove Rishi Kapoor has more to him than just wearing printed sweaters and dancing around trees Also Read - Rishi Kapoor robbed Amitabh Bachchan of the Best Actor trophy by buying it? 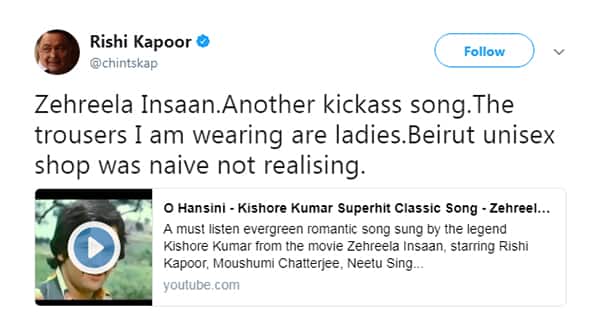 But knowing his wit and unapologetic attitude, Rishi Kapoor was cool enough to mention about the same incident on his Twitter account in 2015 and later in his memoir, Khullam Khulla, which released last year. Among the many shocking confessions that the actor made in his memoir, this one was probably the most amusing and yet shocking at the same time.