Did you notice? STR looks like this star Indian cricketer in the latest poster of Chekka Chivantha Vaanam – view pics

With the release date few days away, the makers have begun promotional activity for the film and have started unveiling posters from the film.

Chekka Chivantha Vaanam is gearing up for release on September 27, 2018 worldwide and Tamil audience is quite kicked about this huge multi-starrer for obvious reasons. CCV stars Arvind Swami, Jyothika, STR, Arun Vijay, Aishwarya Rajesh, Vijay Sethupathi and Aditi Rai Hydari in lead roles while Prakash Raj will be seen in a pivotal role. With the release date few days away, the makers have begun the promotional activity for the film and have started unveiling posters from the film. And one such poster featuring STR aka Simbu caught our attention in terms of his similarity with another celebrity. Also Read - Super Deluxe, Soorarai Pottru, Karnan and more: 10 extraordinary Kollywood films which you can binge watch on OTT platforms

STR looks a tad bit like Indian cricket captain Virat Kohli in this poster and the striking similarity has left fans amused and happy in way too. STR’s beard look in Chekka Chivantha Vaanam is very similar to Virat Kohli’s look and we cannot figure who is the doppelganger of the other. See the comparison here… Also Read - Before Ponniyin Selvan, birthday boy Mani Ratnam to direct the sequel of THIS cult blockbuster? 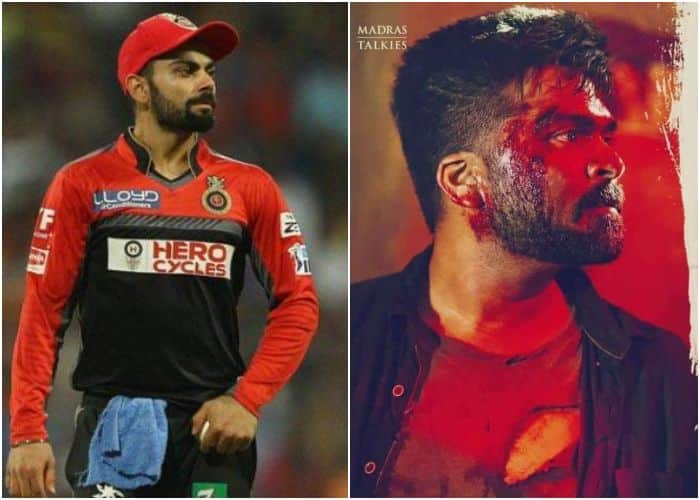 ALSO READ: [PHOTOS] These pictures of STR and Dayana Erappa from the sets of Chekka Chivantha Vaanam will make the wait for the film harder