Dil Dhadakne Do movie review: Priyanka Chopra and Anil Kapoor save this ship from sinking faster than the Titanic! 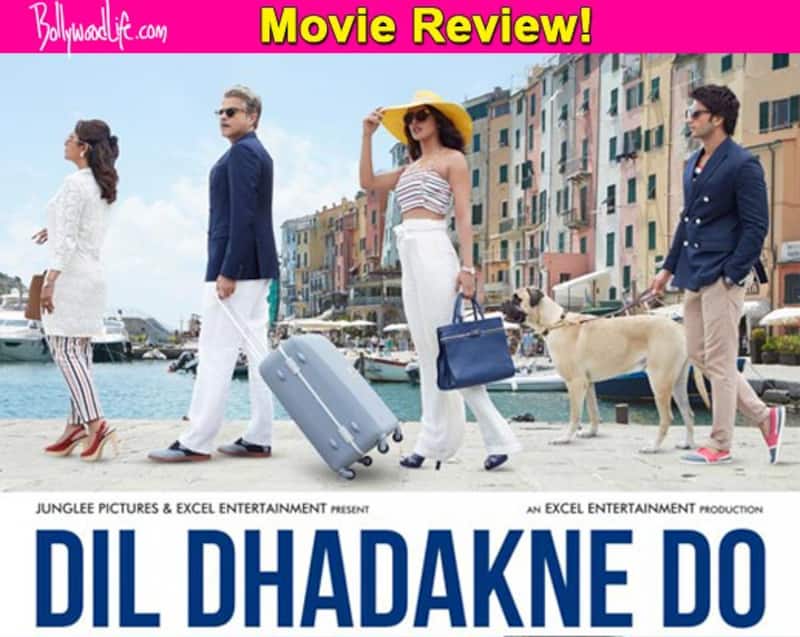 Zoya Akhtar's much hyped film is finally going to hit the theatres tomorrow! Will she manage to have another hit to her credit? We'll have to wait to find that out for now we tell you if this movie is worth your money...

Priyanka Chopra, Ranveer Singh, Anushka Sharma, Farhan Akhtar, Anil Kapoor, Shefali Shah and Rahul Bose, well taking names of this ensemble cast in one sentence is exhausting, but is Zoya Akhtar's Dil Dhadakne Do too? Read on to find out... Also Read - Chahatt Khanna opens up on why she shamed Urfi Javed's outfit and took a dig at her; 'It was really getting tough to tolerate'

What's it about: Also Read - Ranveer Singh nude photoshoot controversy: PIL filed in the court to seize all printed copies of the magazine

Dil Dhadakne Do has been advertised and promoted as a ensemble about a dysfunctional family. But after walking out of the theatre I realised there was hardly anything odd about the Mehras. If anything you might often find the awkward dinner table sequences or those stoic pauses and silences between the parents (Anil and Shefali) and their kids (Ranveer and Priyanka) extremely relatable. This time Zoya ditches the road and takes the ocean route. Setting the film against the backdrop of a cruise ship was an ingenious idea as it doesn't really allow the viewer to look beyond the characters trapped on the moving island. While there are more than half a dozen characters thrown into the plot, the most important one is a four legged creature named Pluto (voiced by Aamir Khan) who is the narrator of the film. The first half introduces us to the Mehras and their quirky personalities. We are serenaded into their glitzy living rooms where sundowners and brunches are planned over bottles of champagne. But all this is peripheral, deep down in the vortex the family shares a shallow void of not feeling loved. While the bankruptcy is just a catalyst to take the story forward, DDD is a story of how superficial even the closest of relationships can be. Anushka Sharma, Rahul Bose and Farhan Akhtar play important supporting roles giving this large ensemble a bit of colour. Also Read - Shah Rukh Khan, Kareena Kapoor Khan, Aamir Khan and more Bollywood actors who have weird clauses in their contracts

Zoya knows how to make her films look good. DDD is absolutely gorgeous. From the introductory shot of the grand cruise ship to the exotic locales of Turkey, each frame is a delight to soak into. The cast is terrific and everyone has a good reason to stay in the plot. The Mehras- Anil, Shefali, Priyanka and Ranveer are exceptional. But the one who gets the maximum seetis and makes you feel on 'top of the world' is Anil Kapoor. He knows when to go OTT and where to show restrain. Despite working opposite actors half his age and more popular than him, there is no insecurity to perform better or overpower the other. A classic example would be an emotional scene between him and PC that comes in the second half at an important junction in the film, where his character has so much to say but he lets Priyanka's expressions do all the talking. Performances are heartfelt, and Priyanka goes for the kill. Her scene where she speaks her heart out to her parents about wanting to divorce her husband has very few lines, but that body language, the quivering lips and fear in her eyes speaks more than anyone could write. Ranveer and Anushka have terrific chemistry and that lip lock is more than a reason why we need to see these two together more often.

Unlike Zindagi Na Milegi Dobara, DDD has a different sort of humor. Don't go expecting some witty banter or one liners. This time the jokes are subdued and you need to be evolved to get some of it. The first half takes too long to get over the introduction. Even when we get on board the cruise ship, it takes a while before we go full steam. There are some good scenes and moments that stay, but the plot has a lack of cohesiveness. Especially Ranveer's track with Anushka feels abrupt and you don't really care for their romance which actually is the climax of the film. Similarly Farhan walking back into Priyanka's life and her reaction to him feels a bit forced. Like Luck By Chance where Zoya tried to dust off the glitter and reveal the dark side of Bollywood, DDD doesn't really give us anything different about the upper crust than we already knew. Hardly an expose! Music is average and the only foot tapping track is Gallan Goodiyan.

Dil Dhadakne Do boasts of a stellar ensemble, now only if we could say the same about the writing! You might want to get off this ship half way.