Disha celebrated her 27th birthday yesterday. And on her birthday, she gifted herself with the cutest thing on the earth. Can you guess? She has four paws, whiskers and loads of fur.

Disha Patani is hands down one of the hottest actresses in Bollywood today. Her hourglass figure and her style statements are often the talk of the town. Disha's popularity is increasing day by day for all the right reasons. The actress celebrated her 27th birthday yesterday. And on her birthday, the Bharat actress gifted herself with the cutest thing on the earth. Can you guess? She has four paws, whiskers and loads of fur. It's a kitten! Cute, no? Wait till to actually see the kitten whom she has very smartly named 'Keety'. The actress took to her Instagram handle and shared a cute picture of Keety introducing and welcoming her into the family. The caption read, "Welcome to the family “keety” ❤️" Have a look at her adorable picture here: Also Read - Ayesha Shroff withdraws two FIRs against Sahil Khan over allegations of cheating and criminal intimidation

Welcome to the family “keety” ❤️

We admit, Keety is really cute but what amused us more is Tiger Shroff's mother's comment on the picture. Ayesha Shroff too welcomed Keety to the family. Her comment read, "Yaaaaaaayyyyyy keety!!!❤️❤️❤️❤️❤️❤️" Have a dekko here: Also Read - SAY WHAT! Tiger Shroff made Krishna Shroff believe she was adopted? Latter REVEALS a side of the Ganpath star that no one knows [EXCLUSIVE VIDEO] 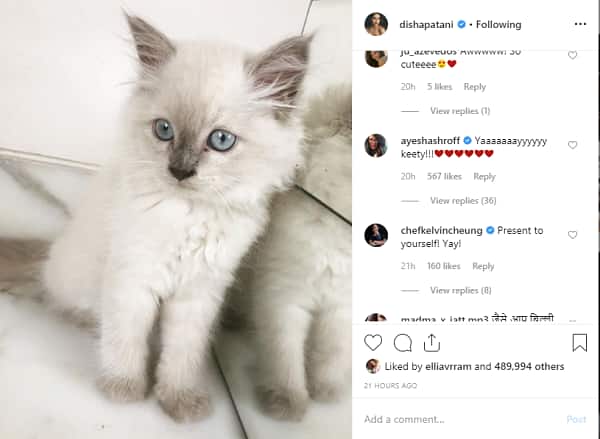 Not only a picture, but Disha also shared a video where she is seen cuddling with the munchkin. She sure is spending some quality time with the kitten and chilling at home. But that's not it, in the video, you can also see the cute little kitten begging Disha to pet her and the latter showering her with kisses. Check it out right here... Also Read - Krishna Shroff reveals who's fitter and who's lazier between her and Tiger Shroff; shares VITAL fitness tips for those who can't hit the gym [EXCLUSIVE VIDEO]

Disha also thanked her fans for wishing her and showering Keety with lots of love. Have a look at her story post here:

Meanwhile, Disha was recently seen in Salman Khan and Katrina Kaif-starrer Bharat. The actress played Radha, Salman Khan's first crush in the film. Up next, she will be seen in Mohit Suri's Malang. Aditya Roy Kapur will be the main lead opposite Disha. It is said to be an action-thriller and we will be treated to some uber cool underwater action sequences. Malang also stars Anil Kapoor and Kunal Kemmu. The film is expected to release early next year.