DIVORCED!! It's legally over between Karan Singh Grover and Jennifer Winget!

We all know how Karan Singh Grover has split with ex-wife Jennifer Winget due to mutual differences. The two parted ways back in September last year and have been fighting for divorce ever since.

We all know how Karan Singh Grover has split with ex-wife Jennifer Winget due to mutual differences. The two parted ways back in September last year and have been fighting for divorce ever since. In fact, a couple of months back, reports even suggested how Jennifer is demanding a huge alimony which is why their divorce was put on hold. However, with the past gone by, the court has FINALLY approved of their divorce and the couple have been legally separated! Yes! We just came across these leaked pictures of their divorce papers that's doing the rounds on the internet right now which clearly suggests that Karan Singh Grover and Jennifer Winget are legally DIVORCED. Does this mean, KSG can now go ahead and marry his current lover, Bipasha Basu? Also Read - Bollywood’s most gorgeous yoginis who swear by the goodness of yoga 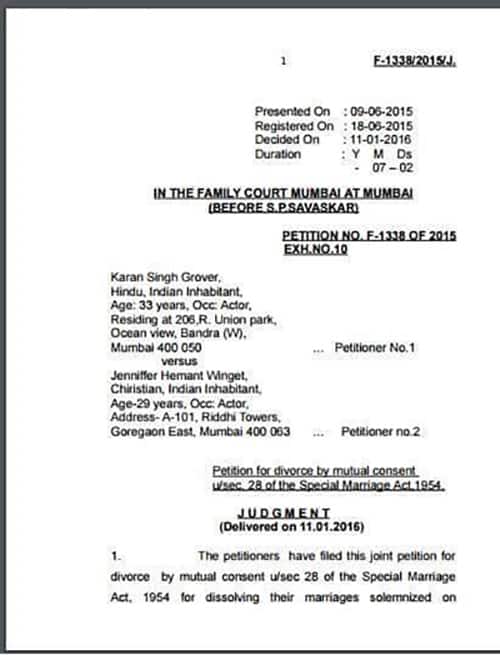 Well, no wonder their engagement rumours have already become the talk of the town. In fact, you wouldn't believe, but even Jennifer has approved of Karan's choice and chooses to respect his new found relationship with Bipasha. She had tweeted about the same saying, "I'm delighted to know that he's moved on in life and would like to wish his partner and him all the best in all their future endevours. In the same post, Jennifer even clarified how the reports of she demanding a huge alimony from her estranged husband is 'factually incorrect' Also Read - Popular Bollywood actresses who went under the knife to get the perfect bosom! The before-after pictures will leave you speechless!

Nevertheless, we believe this legal declaration of divorce will only make their lives better. What do you think? Indeed, it's a 'Happy Birthday' for KSG who is busy ringing in the day with his ladylove, Bipasha in Goa! 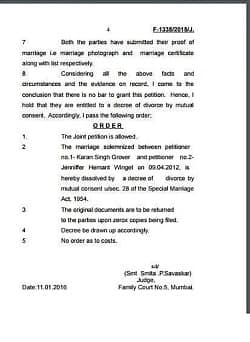