You don't mess with Ishita Bhalla aka Divyanka Tripathi!

Be it a bikini picture of a makeover for the show, actors get trolled all the time on social media. The recent one to give it back to trolls is Divyanka Tripathi. The actress got another makeover in Yeh Hai Mohabbatein and will be seen as an Haryanvi maid on the show. While fans are happy with the makeover, the actress got trolled for turning a couple of shades darker in her new avatar. The troll called Divyanka pathetic and disgusting because she turned darker for a TV show. The person apparently also felt that it's humiliating to the lower class people. Also Read - From Rahul Vaidya to Rakhi Sawant to Rubina Dilaik: 11 celebs who should thank reality shows for bringing them back in the limelight

The person commented saying, "That's pathetic of you to do a black face for a tv serial. Being dark is not a bad thing and this is really disgusting of you to do" and "Black facing yourself for the sake of a "tv serial track" is pathetic. You didn't lighten your makeup when you were pretending to be a foreigner in the tv serial, why did you darken yourself to become a maid? Exactly. Double standards." Divyanka gave it back to her saying, " If I chose to be dark... How's it pathetic? Do you find it pathetic? You guys don't even think before bashing! Which Indian actor will voluntarily choose to look dark on screen? It's not usual!!!" She also said, "Know me first before judging! I'm doing that make up myself! Everyday! So please... Watch the track, understand and respect instead of writing baseless provocative comments!" (ALSO READ: Divyanka Tripathi’s comatose state on Yeh Hai Mohabbatein has left us wondering about the state of medical science) Also Read - Khatron Ke Khiladi 11: Did Rahul Vaidya take a dig at the makers with his ‘You must know who is gold and who's gold plated’ comment?

A post shared by Divyanka Tripathi Dahiya (@divyankatripathidahiya) on Jan 16, 2018 at 6:00am PST

Do not miss her tonight! Discover a riot behind this veil... Tonight at 7:30pm on #YehHaiMohabbatein @StarPlus. #ShannoTeraSwagger

A post shared by Divyanka Tripathi Dahiya (@divyankatripathidahiya) on Jan 16, 2018 at 4:20am PST 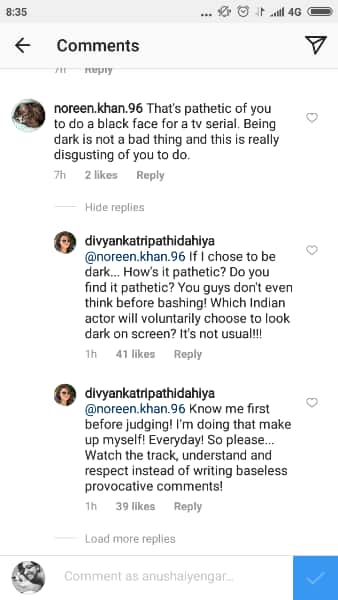 Divyanka is someone who is quite respectful towards everybody and everything. And there is absolutely nothing wrong with her new look on the show. What are your thoughts on this? Tell us in the comments below and stay tuned with us for more.