Divyanka Tripathi THANKS ex Ssharad Malhotra for defending her on social media, calls it the BEST PARTING GIFT!

Divyanka Tripathi and Ssharad Malhotra were in a steady relationship for over 8 years....

Are we really getting to see Divyanka and Ssharad's bonding on Instagram?

Coming nothing short of a surprise, Ssharad Malhotra just posted a heartfelt note on Instagram requesting people to stop abusing, trolling his ex girlfriend Divyanka Tripathi. Turns out Divyanka personally messaged him to do so and he mentioned the same stating, "Was a little disappointed when I got a text from Mrs Divyanka Tripathi Dahiya stating that apparently some of my fans were deterring her image and hurling abuses at her and family. On one hand we have the women at the Olympics making the nation beam with pride and happiness and on other we also have a certain section of people who are disrespecting women.. As Mrs divyanka tripathi Dahiya asked me to make a public note, so I hereby request one and all that kindly respect women and please respect our privacy as we both have moved on... I wish her a happy married life. Also I completely believe that true fans of mine would never tarnish a women's image." Also Read - From Kapil Sharma to Sunil Grover: 8 TV celebs charge who CHARGE a bomb for an episode – view pics

We know it's shocking and most of you guys dunno how to react! Trust me, we are going through the same thing! But what's even strange is how Divyanka has replied to Ssharad's message. She commented on the same post saying, "Thank you Ssharad. It means a lot. The best parting gift. May you have a great life ahead. Be happy. Love to the family." Can you believe this is happening for real? Also Read - Khatron Ke Khiladi 11: Divyanka Tripathi, Arjun Bijlani, Shweta Tiwari, Rahul Vaidya, Varun Sood and Vishal Aditya Singh are top 6 finalists; who will win? Vote now

Divyanka even exchanged a couple of messages with Ssharad's loyal fans on this thread, which only proves how both the ex lovers are over each other and don't want their past to ruin their present or future. Here check out Divyanka's replies below and tell us what do you think of this? Do you think Divyanka should have asked Ssharad to put up a message? Share in the comments below and we'll be back with more updates on this hot story. 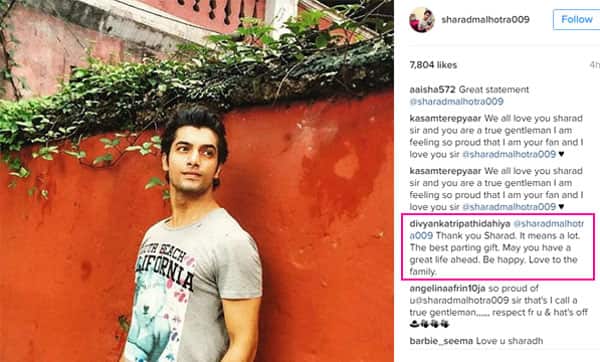 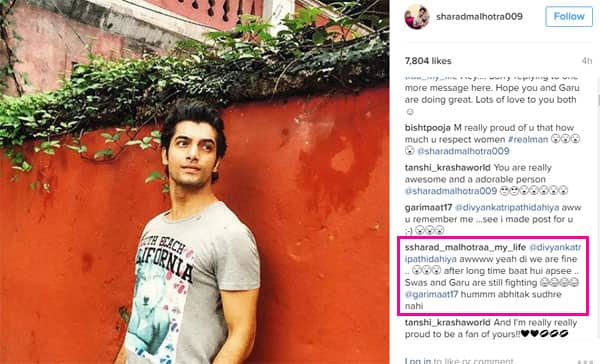