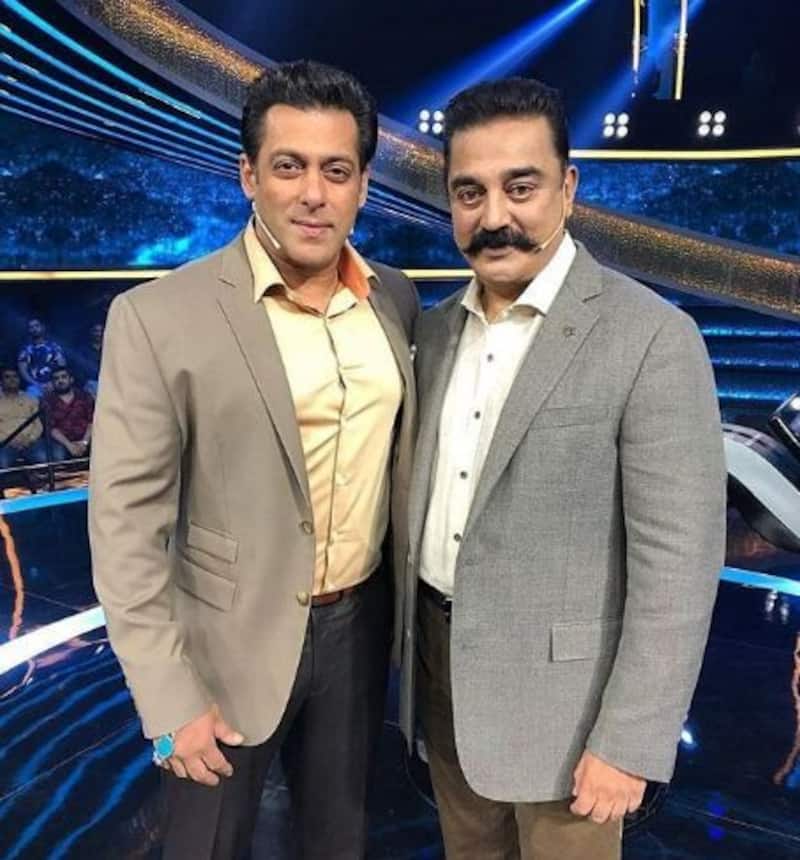 Dus Ka Dum 3 starts with Salman Khan welcoming Shilpa Shinde and Karan Patel on the show. Both the actors took part to support charities of their preference. They play a fun round with the superstar host. Funny props make the game more interesting. Shilpa reveals that she would not mind marrying Salman to which he replies do you want to marry a Bhai. The questions for the two were quite funny right from how many Indians have dug their nose and wiped it on a table to how many express love through Antakshari. Kamal Haasan walks in and Salman greets him warmly. They are twinning in matching coats. Salman says he loved Ek Duje Ke Liye and spoke how his performance in Sadma gave a scare to all Bollywood actors. Also Read - Trending Entertainment News Today: Kaali's poster with a Goddess smoking draws flak, Top Bollywood actress having trouble adjusting with in-laws and more

On Shilpa Shinde's request, he sings Mere Jeevan Saathi for her. Salman reveals that he is also a trained classical dancer. Kamal says he knows Bharatnatyam and also learnt Kathak for Vishwaroopam. He says that Vishwaroop 2 has romance and action. Salman says that Kamal is the pioneer of multi-language films. He is proficient in Tamil, Hindi, Telugu, Kannada, Malayalam and English. He makes Kamal say his hit dialogue Maine Ekbaar Commitment Kar Di in South Indian languages and tries to repeat it. Salman fumbles in the Malayalam bit. Both of them share a hearty laughter. Bhai says that Mohanlal will kill him after hearing his Malayalam. Salman tells everyone to check out Vishwaroop 2. Haasan leaves the show. Also Read - GodFather First Look: Chiranjeevi's powerful avatar gets a thumping response from the masses [View Tweets]

Later, Shilpa Shinde reveals that as a kid she did shed fake tears to get her work done. They have a dialogue round where Karan gets the funny line from Dabangg...Hum Tum Mein Itne Chedd Karenge. Shilpa and Salman share a romantic moment as well. The game continues as Karan reveals that he often gets blasted by women for his portrayal of the misogynistic Raman Bhalla on Yeh Hai Mohabbatein. The show ends with the two winning good amounts for their charity. Also Read - Shah Rukh Khan and Salman Khan to reunite for Aditya Chopra's biggest action extravaganza? Here’s what we know