Dussehra 2017: Actor Mukesh Rishi rides a bike dressed as Raavan, gets fined for not wearing a helmet 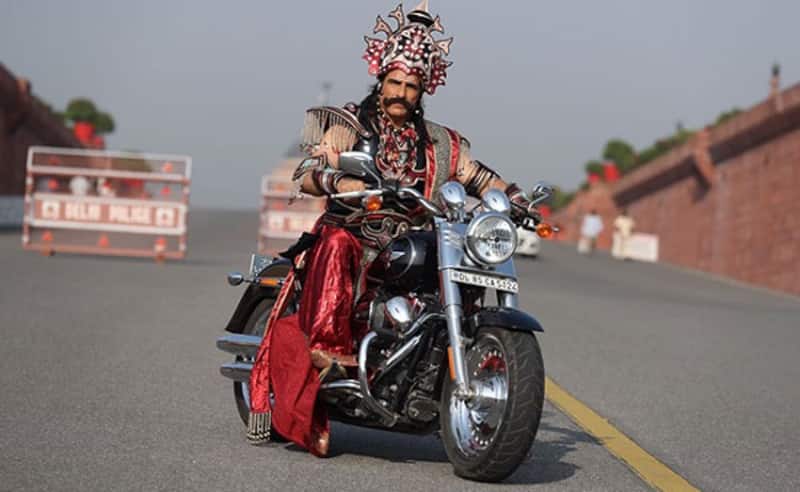 Did you, too, come across the viral video of actor Mukesh Rishi riding a motorcycle dressed as Raavan? Did you also think it was absolutely hihlarious and entertaining? Well, the Delhi Traffic Police will beg to differ, and rightfully so. In an exciting turn of events Mukesh has been slapped with a challan by the police for not following traffic rules, i.e. ignoring to wear a helmet. Also Read - The real Gundaaz's Mukesh Rishi and Harish Patel have a reunion; fans demand Gunda 2

The actor is playing the role of Ravan in a Ramlila production being held at the Red Fort grounds. A video of him riding the motorcycle around India Gate in full costume had gone viral yesterday, prompting the police to send him a notice. "I did it intentionally. No matter who you are, you must wear proper gear while driving. I wanted to send this message. I will pay the fine," Mukesh was quoted saying by Indian Express. Also Read - Khiladi MAJOR UPDATE: Ravi Teja starrer POSTPONED; now eyeing this new release date? [EXCLUSIVE]

He reached the Delhi Traffic Police headquarters today and paid the fine, said a senior officer. The fine paid by him is reported to be as meagre as Rs 100. Though the amount is not shocking, it does send out a very strong message all over India - wear a freakin' helmet. In the year 2016, alone, 10,135 people died in road accidents due to negligence in wearing a helmet, as per an analysis of data shared by states with the transport ministry earlier this year. Also Read - James: Puneeth Rajkumar's last movie to release on this SPECIAL DAY; theatres in Karnataka to ONLY show his film? [EXCLUSIVE]

The 61-year-old actor has played villain in several Bollywood films but this is the first time he will play Ravana. "A bride’s dress is 10-12 kgs these days, but on her special day, she forgets the discomfort. She dances in it, walks in it and enjoys. I feel the same way in my Ravana costume. It is a heavy and decorated piece, and is really hot to be in, but when you’re on the stage wearing it, everything fades out. The heat is gone, that shoe bite isn’t bothering you anymore, the armband doesn’t itch, you just feel one with it, as if its an extension of you," Mukesh told Hindustan Times, before the real-life drama unfolded.