Sumeet Vyas and Ekta Kaul have recently welcomed home a baby boy, Ved. Yesterday, Ekta shared a glimpse of the infant sleeping with his dad

Sumeet Vyas and Ekta Kaul have welcomed home their first child. The baby arrived a week ago. They have named him Ved. Ekta Kaul became one of the celebs who delivered a child in this pandemic along with Smriti Khanna and Nirali Mehta (Ruslaan Mumtaz's wife). The couple managed alone during this period. Ekta Kaul has shared a picture of his son, Ved sleeping beside Sumeet Vyas. We are guessing that the new daddy is sleeping whenever his little one is asleep. As we know, sleep is a rare commodity for new parents. The baby looked cute tucked in baby quilt. Also Read - Saumya Tandon, Puja Banerjee, Natasa Stankovic – 7 actresses whose post-pregnancy transformation will make your jaws drop – view pics

As the child was born, Sumeet Vyas wrote that Ekta and he were behaving in a cliched manner, smothering the child every now and then. The couple got married in September 2018 in Jammu in a traditional Kashmiri ceremony. Jammu happens to be Ekta's hometown. She is best known as Riya Mathur from the Star Plus show Mere Angne Mein. Though the show was a huge success, Ekta said she was doubtful if she was cut out for the life of an actor. They made the pregnancy announcement in May saying that their new project was arriving soon. Also Read - Bigg Boss 14: Rubina Dilaik-Abhinav Shukla's friend Ekta Kaul lashes out at Salman Khan and makers; says, 'You have stooped too low' 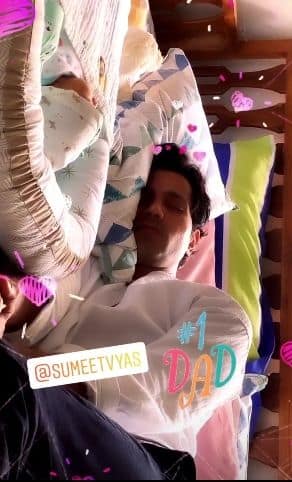 The child was born at a maternity hospital that is run by Sumeet Vyas' aunt. It seems the couple could not trust a multi-specialty hospital at the time of the pandemic. Talking about the name, he said he liked the name Ved for a long time. It seems once his relative and he were discussing baby names. Also, it kind of makes sense as they apparently are descendents of Ved Vyas. It all kind of fitted in together as per the actor. This is Sumeet Vyas' second marriage. The couple met somewhere in 2017 at a friend's place. BollywoodLife wishes the parents all the best in this new journey!