The Boyhood actress won her first Oscar for the Best Actress in a supporting role...

Patricia Arquette won an Oscar for Best Supporting Actress for her performance in Richard Linklater's Boyhood. The actress was visibly shaken by the win and once she went on stage she thanked all the people involved in the making of the film and her family for their support. Patricia also spoke about wage equality for both genders. In her speech she said, "To every woman who gave birth, to every taxpayer and citizen of this nation, we have fought for everybody else's equal rights. It's our time to have wage equality once and for all and equal rights for women in the United States of America." Also Read - Oscars 2015: Neil Patrick Harris fails to attract telly audiences for the awards show!

At the Oscars, Jennifer Lopez and Meryl Streep gave Patricia's speech the most awesome response as they clapped and cheered loudly in agreement. Pat's Boyhood co-star Ethan Hawke also cheered her on. Patricia's equal pay speech has created a stir on the social media as well! Many are appreciating her for speaking about a crucial subject. Also Read - John Legend and Common's Glory performance moves Oprah Winfrey, Chris Pine, Jessica Chastain to tears! 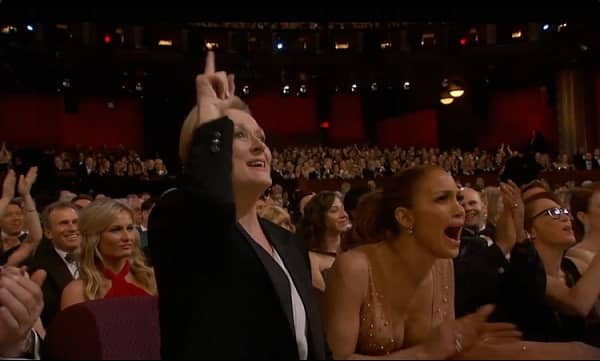 Back home, Rock On 2 actor Farhan Akhtar whose association with MARD (Men Against Rape and Discrimination) also tweeted, "@PattyArquette congratulations on your win. Your acceptance speech was amazing.. #Oscar2015"

@PattyArquette congratulations on your win. Your acceptance speech was amazing.. #Oscar2015

Watch Patty's Oscar-winning speech here and tell us what you think about it!