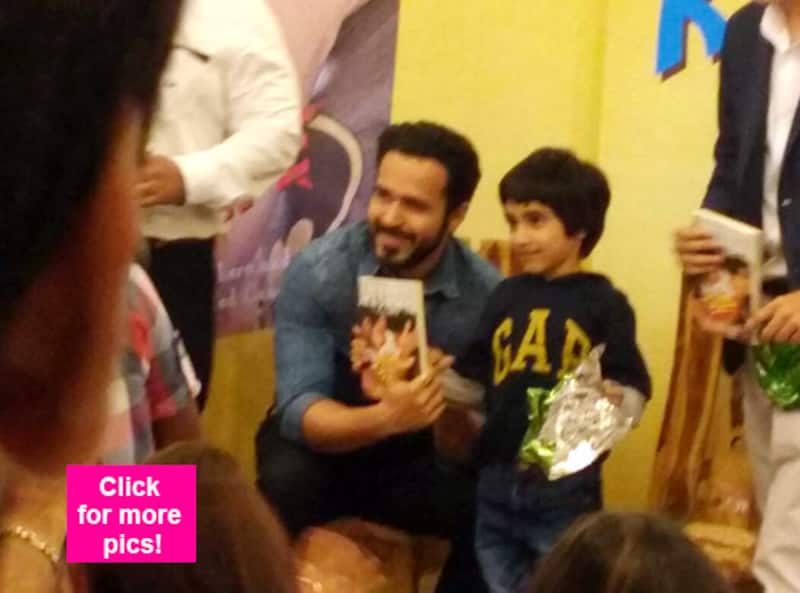 The actor recounts his pains, fears and sense of accomplishment as a parent and co-partner in his son’s fight with cancer

It is a gamut of emotions for Emraan Hashmi, who is releasing his book, The Kiss of Life at a popular Mumbai bookstore today. The book is co-authored by Bilal Siddiqui and was written down in four months. The actor was accompanied by his little rock-star, son Ayaan who battled the dreaded disease like a champion. Emraan’s wife, Parveen was also present. The actor revealed there will be a Hindi and Marathi version of the book as well. Recounting the series of events, the actor said it was January 2014 when he was out for a family lunch when they saw something unusual in Ayaan. He was rushed to the hospital where the actor was looking through the symptoms on google. That was when he read about the dreaded C-word. “Before sleeping, I prayed to God that please doesn’t let it be cancer,” he said. Further, he said that God was very kind on them. “Ayaan fought hard for seven months and then the procedure book happened. We kept him on a good diet and Ayaan worked very well with his medication. He fought himself.” Also Read - From Alia Bhatt's annoying habit in bed to Ranveer Singh losing virginity at the age of 12: Check Bollywood stars' candid bedroom secrets

The actor also gave an insight into his emotions throughout this ordeal. “I thought it would be a painful journey. I have read the book and now I feel a sorrow is behind. Now, it’s a feeling of accomplishment,” he stated. Also Read - From Aishwarya Rai Bachchan to Ranbir Kapoor: 10 celebs whom Kareena Kapoor Khan has never shared screen space with

Famous for his onscreen kisses, the actor was also questioned about it. “I used to buy bags for my wife for every kiss with my heroines. My wife still sulks but now she doesn’t hit me hard. Pehle bat se marti thi, abhi haath se,” he joked. Also Read - Trending Entertainment News Today: Emraan Hashmi on stone pelting incident, Kangana Ranaut's fresh dig at Brahmastra and more

Emraan also spoke about the hardest chapter of the book. He said it took him two months to recover from the trauma when he was shooting for Azhar in London. “I still remember, my son was in a race but he would run two steps and fall down but again he got up and ran five steps ahead before falling down again. He finished his race, looked behind at me, smiled and gave me thumbs up. So, that changed the wisdom of my life. He is a rockstar and he has changed my life completely,” said the proud daddy.

The actor said that he was unsure of how his son’s story could be made into a feature film but he felt it could be made into a documentary. Emraan was also questioned on why he decided to take Ayaan to Canada for treatment when the best facilities are there in India. He explained that the environment there was conducive to recovery. The air and food there would help him heal faster. “Easy availability of organic food enabled Ayaan to build his immunity. I did not want to lose him and today you can see what a horse he is,” he said.

Lastly, the actor signed off by saying that he was happy with the appreciation he got for Azhar.