Anushka Sharma and Virat Kohli's daughter, Vamika turned one on 11 January. Fans of Virat and Anushka had sent love and good wishes for their little munchkin on social media.

Anushka Sharma and Virat Kohli's daughter, Vamika turned one on 11 January. Fans of Virat and Anushka had sent love and good wishes for their little munchkin on social media. Their fans are eagerly waiting to see little one's face, but Anushka and Virat said that they will not share photos of their daughter's face on social media till the time she gets an understanding of the world. But, recently Anushka decided to treat all her fans with a glimpse of her daughter Vamika. Anushka reciprocated their love and shared an unseen picture of Vamika on her Instagram stories. Also Read - The Rise of Mopeds in Bollywood Movies

In the picture, Vamika was seen enjoying her playtime in a park with her friend, Anvi Saha. We can only see Vamika's back in the picture. The little one can be seen dressed in a cream coloured dress holding a toy up to her friend's face. The picture was originally shared by Wriddhiman Saha's wife Romi Mitra as she wished Vamika on her birthday. Anushka shared the post and said, “Thank you.” Also Read - Trending Entertainment News Today: Ranveer Singh and Deepika Padukone trolled after returning from vacation, Lata Mangeshkar’s heath update and more 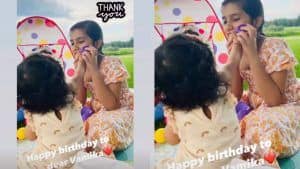 After a sabbatical, Anushka is all set to make a comeback in Bollywood with her film 'Chakda Xpress', which is a biopic about ace cricketer Jhulan Goswami. On the other hand, Virat did wonders in the third Test in Cape Town.