Anushka Sharma who is in the UK with Virat Kohli and baby, Vamika, took to her social media handle and shared a couple of pictures, flaunting her recent haircut. Check out the pictures below:

Anushka Sharma is in the UK right now, with Virat Kohli and their daughter, Vamika Kohli. The actress is unwinding and spending time with her daughter while accompanying her husband on his test cricket tour. The Band Baaja Baarat actress took to her social media handle and shared a couple of pictures, flaunting her recent haircut. Now, you may wonder what's so special about getting a haircut. Anushka Sharma explained the same in the caption of the post. Also Read - Vanity vans of Kareena Kapoor Khan, Anushka Sharma, Katrina Kaif and more B-town beauties spell luxury and are more spacious than most city homes – view pics

In the caption of her post, the Bombay Velvet actress revealed that it was her first haircut after having Vamika. And given the post-partum hair fall, the actress loved her new look. And guess who she got the recommendation from? It's none other than Bhaag Milkha Bhaag actress Sonam Kapoor. For the unversed, Sonam and Anand have a home in London. Anushka Sharma wrote, "When post baby hair fall makes you appreciate a good haircut even more. Thank you @georgenorthwood for this. You are FAB!! And @sonamkapoor for connecting us." Have a dekko at Anushka Sharma's pictures here: Also Read - From Deepika Padukone to Rani Mukerji: Did you know Shah Rukh Khan’s 3am friend and other lady BFFs?

Sonam Kapoor commented on her post saying, "You look amazing," and also dropped a red heart. Virat Kohli, on the other hand, dropped three red hearts. Have a dekko at their comments here: Also Read - Disha Patani, Ranveer Singh, Alia Bhatt and more: Transformation of Bollywood stars from their auditions to now is spectacular – view pics 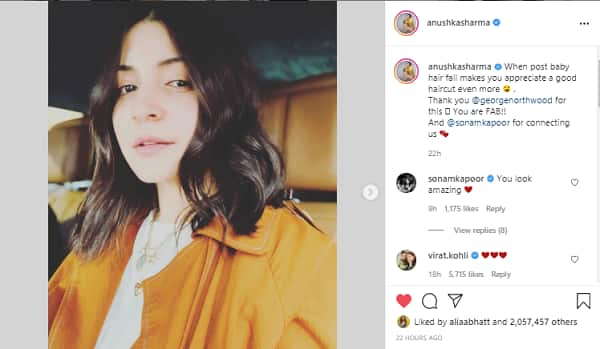 Back when the actress pregnant and giving interviews, she had revealed that she would continue to work and look after Vamika simultaneously. While talking to the Times of India, Anushka had said, "I will be back to my shoots after I deliver my child, and will establish a system at home that ensures I can balance time between my child, home and professional life. I intend to keep working for as long as I live because acting truly makes me happy."

Meanwhile, on the work front, there haven't been any film announcements on Anushka's part. Fans of the actress are eagerly waiting for her to announce a film. Anushka was last seen in Zero alongside Shah Rukh Khan and Katrina Kaif. However, the film was a dud. What do you have to say about glowing mommy, Anushka Sharma's post? Let us know by tweeting @bollywood_life.