Alia Bhatt to shine in Hollywood! The Brahmastra actress signs up with the same agency that manages Gal Gadot, Emma Stone and more

Alia Bhatt is now eyeing a career in Hollywood as well. The actress has signed up with an American talent management and media agency based in the US which also represents Gal Gadot, Emma Stone and more Hollywood celebs.

Alia Bhatt is expanding her horizons in her professional life. The actress is now eyeing to take over Hollywood as well. Yes, you read that right. If you haven't heard it as of yet, Alia Bhatt has signed up with a Hollywood agency and will be trying her luck in the west films as well. As per a report in Deadline, the Highway actress has signed up with WME (William Morris Endeavor) now known as Endeavor, a talent management and media agency that represents artists in movies, television, music, theatre, digital media, and publishing. Reportedly, the agency also managed celebrities such as Emma Stone, Oprah, Gal Gadot, Charlize Theron and others. The actress herself confirmed the news as well. She shared the story of the same on her gram and dropped a 'yay' with a lot of heart emoticons. Have a dekko at the same here: Also Read - KGF 2 BEATS RRR to become the most highly anticipated film of the year 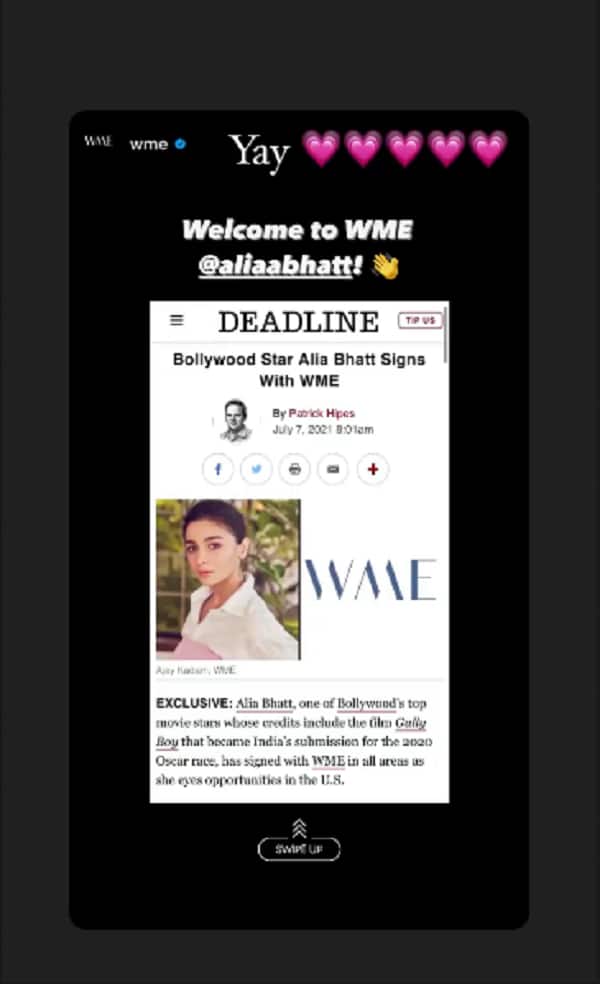 Well, that's just great news. In just a short period, Alia has proved her mettle as an actress with various genres and challenging roles including Raazi, Highway, Dear Zindagi, Udta Punjab and more. The actress is one of the busiest from the youngest lot with several films in her kitty already. But before that, Alia's peers in the industry, Deepika Padukone, Priyanka Chopra, Hrithik Roshan and Vidyut Jammwal have already signed up with Hollywood too. Both the leading ladies have made their Hollywood debuts. While Deepika Padukone was seen opposite Vin Diesel in XXX: Return of Xander Cage, Priyanka Chopra made her mark with Quantico, Baywatch, Isn't It Romantic, We Can Be Heroes and she has several Hollywood projects in her kitty right now including, Matrix 4, Text For You and series called Citadel. This year itself, Deepika signed up with ICM. As per the reports, earlier this year, Hrithik Roshan signed up with Gersh. Also Read - Trending South News Today: Vishal severely injures his back, RRR writer K.V. Vijayendra Prasad reveals why Jr NTR wears a Muslim cap and more

Coming back to Alia Bhatt's work front, she has Brahmastra with Ranbir Kapoor, Amitabh Bachchan, Shah Rukh Khan, Mouni Roy, Akkineni Nagarjuna and more. Next, she has Gangubai Kathiwadi which features Ajay Devgn in a cameo. Alia will make her Telugu debut with RRR co-starring Ram Charan and Jr NTR. She turned producer with her next project Darlings, which also features Shefali Shah and Vijay Varma. And last but not least, she will be seen in Rocky Aur Rani Ki Prem Kahani for which she is collaborating with Ranveer Singh for the second time.