Kamaal R Khan took to his Twitter handle and asked celebrities such as Hrithik Roshan, Ajay Devgn, Abhishek Bachchan and more to help him save entire Bollywood by featuring in his film. And here's why...

Kamaal R Khan wants to save the Bollywood industry. The former actor and a self-proclaimed critic have asked several Bollywood celebrities such as Hrithik Roshan, Ajay Devgn, Abhishek Bachchan, Ayushmann Khurrana, and other actors to help him 'save the entire Bollywood' by starring in a movie produced by him. Furthermore, Kamaal R Khan promised to stop reviewing films once he turns a producer or directs a film. He tweeted out revealing that Big stars of Bollywood have been filing cases against him to stop him from reviewing their films. He said they cannot stop him from reviewing films by sending notices to him. KRK said he would stop reviewing only if they request him and accept him as the number one critic. He tagged the aforementioned celebs in his tweets and asked them to feature in his films if they want to save the entire Bollywood from his reviews. Have a dekko at the trail of Kamaal R Khan's tweets here: Also Read - Bhoot Police actress Yami Gautam shares unseen video from haldi ceremony to wish her 'camera-shy father' on his birthday 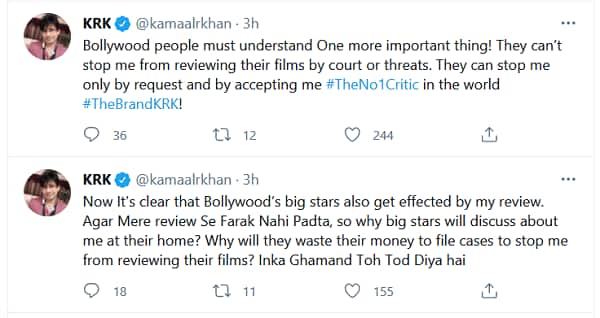 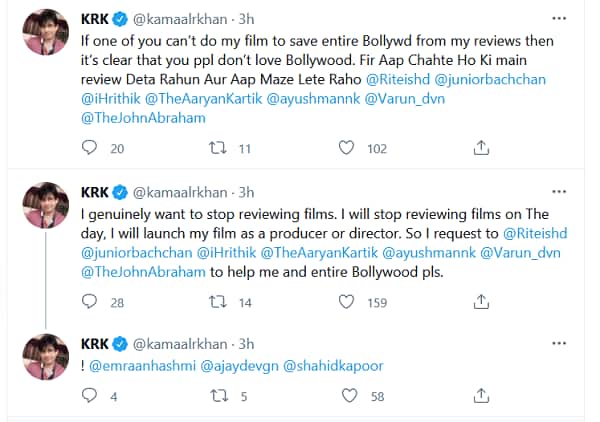 Kamaal R Khan grabbed headlines when he reviewed Salman Khan, Disha Patani and Randeep Hooda starrer film, Radhe: Your Most Wanted Bhai. Thereafter, there was a case filed against KRK. It was reported that the case was filed against him due to the review. However, the lawyers had released a statement saying that the case is filed for his (KRK's) claims of Salman swindling money. Ever since Kamaal R Khan has been grabbing headlines. He also had an online tussle with Mika Singh. Just yesterday, he released a video slamming Mika's friends and shared some alleged secrets about them. Also Read - When Salman Khan won our hearts with his REACTION on ex-girlfriend Aishwarya Rai's wedding with Abhishek Bachchan

He had slammed Vindoo Dara Singh, Toshi, Ali Quli Mirza and Raghu Ram in a video and spoke at length about them. Anyway, what do you have to say about his latest tweets and him tagging Bollywood celebs and asking them to feature in his film? Let us know by tweeting @bollywood_life.