Katrina Kaif has shared a breath-taking view of her lovely abode with Vicky Kaushal in her Instagram stories. Check it out here:

The last couple of weeks in Bollywood News have been filled with Katrina Kaif and Vicky Kaushal's wedding. The duo tied the knot on 9th December 2021 in a grand wedding at Sawai, Madhopur, Rajasthan's Six Senses Fort Barwara. The two newly married lovebirds then reportedly jetted off to Maldives for a short honeymoon before resuming their work. Katrina has been sharing glimpses of her post-wedding life and it's been grabbing all the attention in the media. And now, the Phone Bhoot actress has shared a view from her and Vicky Kaushal's new abode and it is to die for. Also Read - Trending Entertainment News Today: Shehnaaz Gill misses Sidharth Shukla; Kangana Ranaut doesn't have any friends in Bollywood and more

Katrina Kaif took to her Instagram handle and shared a picture of herself and Vicky, holding hands, on the balcony. She captioned it 'Home'. It's quite mushy. We can see the red Chooda in her hand. Check out the story here: Also Read - Vicky Kaushal to Salman Khan: Can you guess these celebs from their school and college pictures? 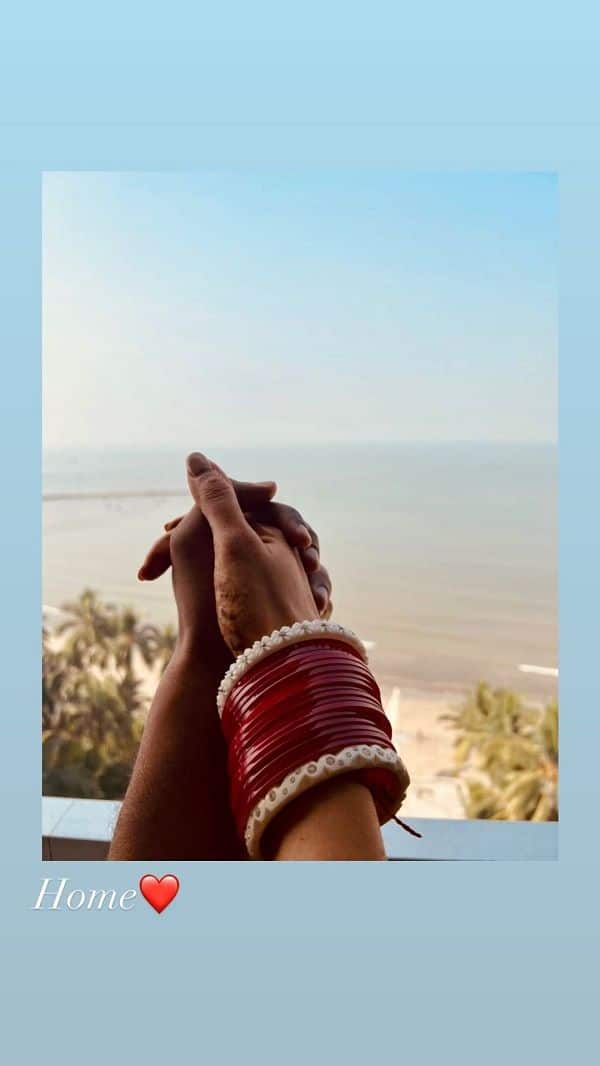 Also Read - Priyanka Chopra's hubby Nick Jonas talks about daughter Malti for the first time; says, 'Life is beautiful, she is a gift'

A couple of days ago, Katrina had shared a picture of Chauka Chardhana rasam wherein she made sheera for Vicky and the family. Katrina and Vicky both are putting out mushy posts after getting married and VicKat fans are enjoying all the lovey-dovey posts.

Talking about the work front, Katrina Kaif is likely to resume work on Tiger 3 with Salman Khan soon. She will be reprising her character Zoya for the third instalment of the action-thriller franchise. She also has Phone Bhoot with Siddhant Chaturvedi and Ishaan Khatter in the pipeline. Vicky Kaushal, on the other hand, has Sam Bahadur. Directed by Meghana Gulzar, the film stars Sanya Malhotra as Sillo Manekshaw and Fatima Sana Shaikh as former Prime Minister of India, Indira Gandhi. Sam Bahadur is based on the life of Sam Manekshaw who was the Chief of the Army Staff of the Indian Army during the Indo-Pakistani War of 1971, and the first Indian Army officer to be promoted to the rank of field marshal. He also has Immortal Ashwatthama. Vicky has wrapped up Shashank Khaitan's Govinda Naam Mera with Kiara Advani and Bhumi Pednekar. He also has a film with Sara Ali Khan.