Legendary actor Dilip Kumar passes away at the age of 98

It is sad news for all the cine lovers today. We have lost one of the finest actors of the Hindi film industry, Dilip Kumar. Yes, ANI took to their social media handle and tweeted out the news. ANI tweeted out that Dr. Jalil Parkar of Mumbai's PD Hinduja Hospital had revealed the news of the veteran actor's demise. "Veteran actor Dilip Kumar passes away at the age of 98, says Dr Jalil Parkar, the pulmonologist treating the actor at Mumbai's PD Hinduja Hospital," the tweet read. Have a dekko at it below: Also Read - Kriti Sanon lambasts 'insensitive' videos of paparazzi covering Dilip Kumar's funeral; says, ‘They were talking so badly, laughing about not getting the angle’ 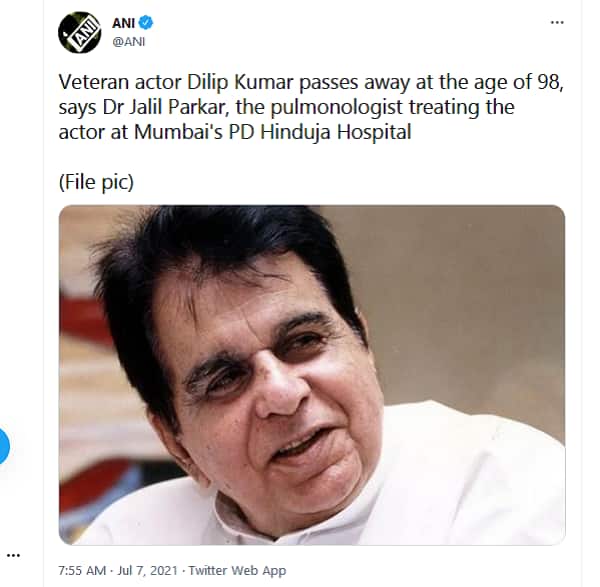 Also Read - BREAKING! Director Rakeysh Omprakash Mehra opens up on his next with Farhan Akhtar; says, 'Will put Bhaag Milkha Bhaag and Toofan together' [EXCLUSIVE]

The legendary actor worked in the industry for about 5 decades and entertained everyone with some amazing movies. He was hospitalized a couple of days ago after he complained of breathlessness. It was earlier reported that on June 6th the Aan actor was diagnosed with bilateral pleural effusion. He had later undergone surgery for the same and had been discharged on 11th June. Also Read - Sarpatta Parambarai star Arya opens up on his married life with Sayyeshaa and memories with late legend Dilip Kumar

Just on Monday night, Saira Banu, the veteran actor's wife and former Hindi film actress, had asked everyone to keep Dilip Kumar in their prayers. She had also tweeted out saying that his health had been improving. This is indeed a tragic loss for the entertainment industry and his family.

Last year, Saira Banu had shared that he has not been too well given the pandemic situation in the country. She had said, "He’s not too well. He’s weak. At times, he walks into the hall and back to his room. His immunity is low. Pray for his welfare. We are grateful to God for each day."