Mira Rajput Kapoor is a proud mommy as Misha and Zain display their culinary skills; feels she has 'done something right' – view pic

Mira Rajput took to her Instagram handle and shared a picture of a salad that was specially made by her kids, Misha and Zain Kapoor. The mommy-dearest could not stop praising her babies and felt proud. Watch Mira Rajput's Instagram story below:

Shahid Kapoor's gorgeous wife, Mira Rajput is a doting mother. While she's busy being a momma and an entrepreneur, the actress is being taken care of by her little munchkins. Yes, you read that right. Misha Kapoor and Zain Kapoor dote on their mom as much as she dotes on them and the young mommy shared the proof of the same on her social media handle. Mira Rajput Kapoor shared a picture in her Instagram stories. It is a picture of salad with little hands, we guess of Misha holding them. In her caption, Mira revealed that Misha and Zain made her a salad. She wrote, "My babies made me a salad and fed me. I must have done something right." Have a dekko at her picture here: Also Read - Mahesh Babu's son Gautham Ghattamaneni achieves this TOP FEAT in all of Telangana 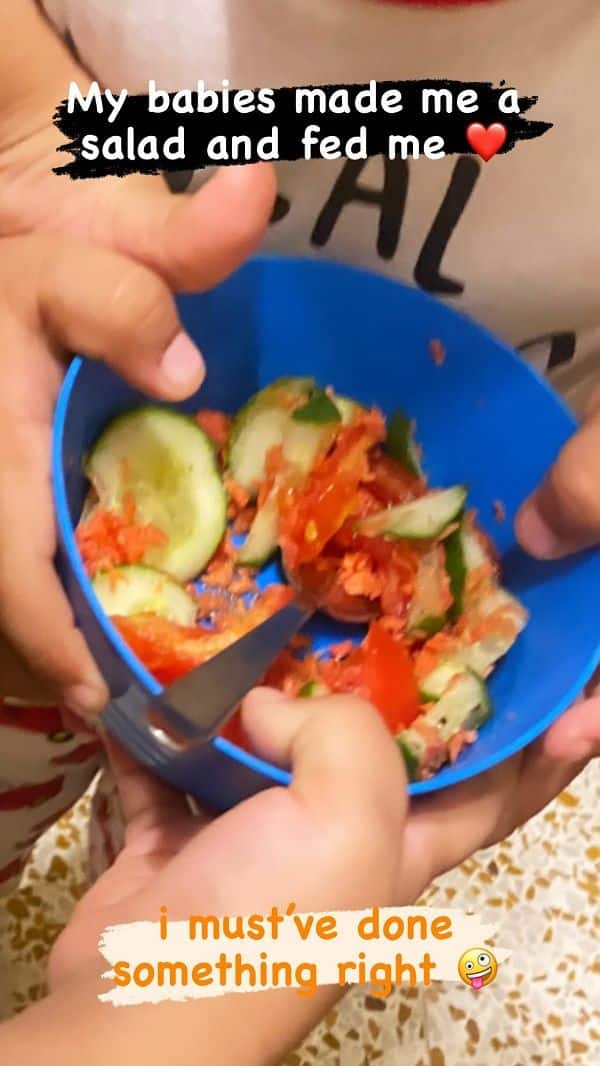 Mira has been sharing glimpses of her parenthood life (bliss) on her gram every now and then. She has also spoken about her pregnancy, pre and post-pregnancy effects on women, and more. Back in January, Mira Rajput had opened up on what values she wants to inculcate in her kids. The young mommy had told Times Now Digital that it is crucial for parents to set the right examples for their kids. Elaborating the same, Mira had said, "For children, their parents are their role models and as parents, we’ve got the responsibility to ensure we set the right example. So it is important for us to inculcate those small healthy habits at a young age so that it sticks with them for life." Also Read - Yami Gautam defines new sister goals with the love she showers on younger sis, Surilie, in her new mehndi video

Being a fit and health-conscious individual, Mira Kapoor said, "This is exactly what I want my little ones to learn and imbibe from me, good health gives you the power to do everything in a better way, but one need not go over the top but can stick to simple home remedies for the same." Elaborating on how she inculcated healthy habits, Mira said, "Right from the time my kids were little, I gave them things like amla juice and haldi doodh regularly and we started all this when they were really young."

What do you have to say about Misha and Zain’s cooking skills? Let us know by tweeting @bollywood_life.