Tiger Shroff's sister, Krishna Shroff's riposte, to a troll who slut-shamed her bikini pic is all things SAVAGE

Jackie Shroff's daughter, Krishna Shroff was recently slut-shamed on social media for posting a picture in a bikini. But she's the daughter of the bhidu of Bollywood. Nobody messes with her. Check out Krishna's savage response.

What's it with the trolls who love slut-shaming people in the guise of anonymity on social media? A lot of Bollywood and television actresses have been at the receiving end of these faceless bots who have plenty of free time on their hands to pass cheap and nasty comments, despite it not being their business. Recently, popular television actress Sayantani Ghosh called out a social media user who had posted a cheap comment asking her the size of her bra during a live interactive session. The Naagin 4 actress gave it back to the troll in her own way. And now, Bollywood star Tiger Shroff's sister Krishna Shroff lost her cool when a netizen compared her to her brother and tried slut-shaming her. Also Read - BTS’ V aka Kim Taehyung is a doting dad to Teacup Pomeranian, Yeotan – view pics

Krisha had a savage response for the troll. She wrote back saying, "Sir, thank you so much for your concern, but you can kindly f**k off. Thank you. Someone translate my message for the dude. Thanks." Have a dekko at the comments here: Also Read - Krystle D'Souza wants Sidharth Malhotra to do Shahid Kapoor's Kaminey type roles – here's why [Exclusive] 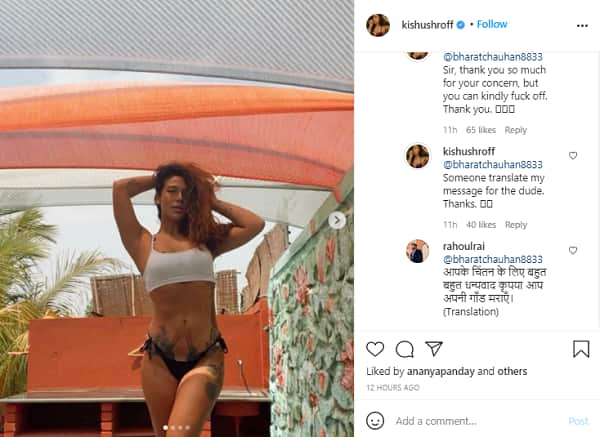 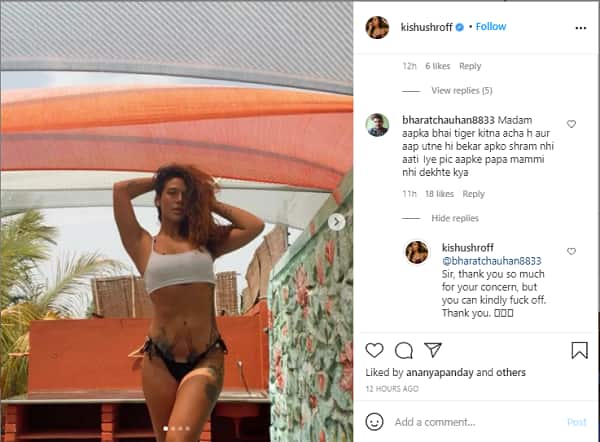 Krishna Shroff shared a video on her Instagram stories in which she could be seen chilling in the pool with her father, Jackie Shroff. She also shared her solo pictures and video enjoying her swimming sessions in the pool. Looks like some people have too much time on their hands to past nasty and cheap comments. On the work front, Jackie Shroff's recent release is Hello Charlie which features Adar Jain in the lead role. He will be seen in Radhe next alongside Salman Khan, Disha Patani, Randeep Hooda to name a few. He also has Sooryavanshi alongside Akshay Kumar, Ranveer Singh and Ajay Devgn. Tiger Shroff, on the other hand, Ganapath alongside Kriti Sanon, Baaghi 4, a remake of Rambo and Heropanti 2 in the pipeline.

(with inputs from IANS).