The video of Salman Khan clicking selfies with his fans was shared by the paparazzi recently. It is going viral on social media and it's all thanks to the Tiger 3 actor's one sentence.

Tiger 3 actor Salman Khan was spotted out and about the city recently. And his fans on seeing him around, couldn't let go of the opportunity and click pictures with the superstar. However, it's what happened next that has become the talk of the town. The video shared by the paparazzi is going viral on social media and it's all thanks to the Bharat actor's one sentence. So, the fans were clicking away selfies with the Bigg Boss 15 host. Fans were seen surrounding him while he stood by his car. He spotted one such fan who seemed to be lingering around for a selfie. Salman hilarious asked him to stop dancing around. "Aye tu nachna band kar," he said while gesturing him to click a selfie. Check out the video below: Also Read - Tiger 3: Here’s how Emraan Hashmi is training for his action scenes with Salman Khan – Watch Video

Netizens are busy trolling the whole scenario and the video. Some of the social media enthusiasts trolled the fans saying, "Aacha hua caapaaataa nahi padaaa. (Good that he didn't get a smack)." Another one wrote, "Accha hua is bar phone china nhi. (Good that he didn't take the phone away this time)." Some of the netizens also called out Salman for his rude behaviour. "Kai ka aakad," one of the netizens wrote, while another wrote, "itna ghamand thik nahi." Check out their reactions here: Also Read - SAY WHAT! Salman Khan reveals he enjoys watching his BAD MOVIES and the reason will leave you STUNNED 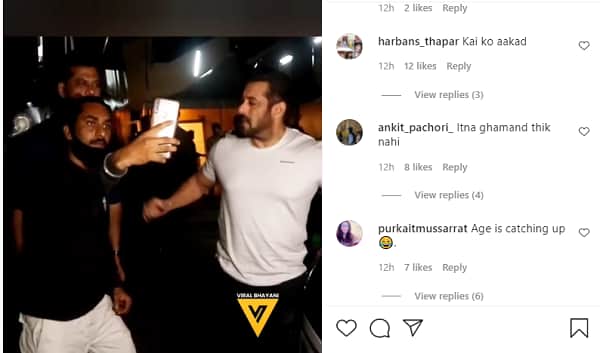 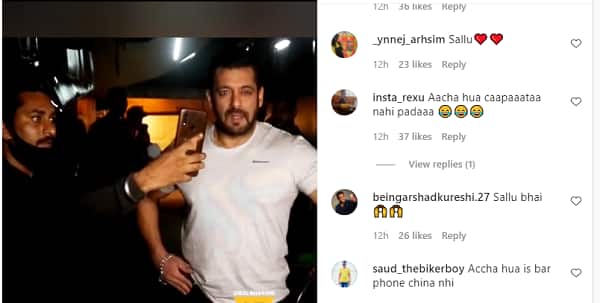 Also Read - SAY WHAT! Salman Khan names his favourite cop of all time and it's not Chulbul Pandey or Singham but a family member

On the work front, Salman is busy hosting Bigg Boss 15 Weekend Ka Vaar every week. He has Tiger 3 in his kitty with Katrina Kaif. He also has Antim: The Final Truth with Aayush Sharma, releasing on 26th November. He is said to have a cameo in Aamir Khan, Kareena Kapoor Khan and Naga Chaitanya starrer Laal Singh Chaddha. He is said to have an extended Cameo in Shah Rukh Khan, Deepika Padukone starrer Pathan, directed by War helmer, Siddharth Anand.