Not just Disha's fans but also her rumored boyfriend Tiger was left in complete awe with her beauty.

Bollywood actress Disha Patani recently took the internet by storm with her hot photoshoot pictures. The petite actress donned a short denim skirt along with a shimmery racer-back sequins top and looked glamorous in these pictures. She teamed her look with strappy heels and her hairdo was inspired by 90s look. In these pictures, Disha looks classy and oozes oomph in 90's style. Also Read - Big-budget Bollywood movies of 2021: Sooryavanshi, '83, Pathan, Radhe Your Most Wanted Bhai and more

Disha shared the pictures on her social media and within no time, the photos went viral on the internet. Disha's smoking hot look recently got a reaction from her rumored boyfriend Tiger Shroff, sister Krishna, Khushboo Patani, and other B-town celebrities. Not just Disha's fans but also her rumored boyfriend Tiger was left in complete awe with her beauty. Tiger dropped a heart emoticon along with fire emoji in the comment section. Krishna Shroff wrote, "DAMNNN." Also Read - Throwback Thursday: Can you guess THIS gorgeous actress from this childhood picture with her sibling?

Well, Disha manages to turn heads with her sartorial choices and has upped her style game. The actress never fails to impress her fans with her style and slays in every outfit. 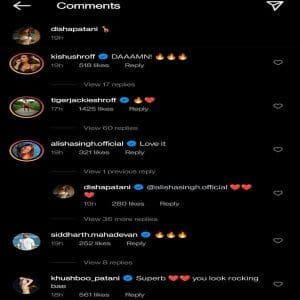 There are rumors which state that Disha and actor Tiger Shroff are in a relationship, but the two have never spoken about their relationship status. Both Tiger and Disha were seen together in the action-thriller film 'Baaghi 2' and their fans want to see them again on the big screen.

On the work front, Disha was last seen in Malang alongside Aditya Roy Kapoor. Disha will next be seen in Salman Khan starrer 'Radhe: Your Most Wanted Bhai'. The movie is helmed by Prabhu Deva.