Bollywood actress Disha Patani is all praise for her rumored beau and actor Tiger Shroff. Well, recently the reprised version of the patriotic song 'Vande Mataram' was released on Tuesday, August 10.

Bollywood actress Disha Patani is all praise for her rumored beau and actor Tiger Shroff. Well, recently the reprised version of the patriotic song 'Vande Mataram' was released on Tuesday, August 10. The song starred Tiger Shroff and his voice left everyone in awe of his personality. The song is a tribute to the defense forces. Disha shared the clip of the song on her Instagram stories and wrote “You are unbelievable.” Tiger reshared Disha's story and thanked her. He wrote, “Thank you so much D." Also Read - When Ranveer Singh, Ranbir Kapoor, Shraddha Kapoor and more Bollywood stars delivered 8 Box Office BLOCKBUSTERS in just 1 year 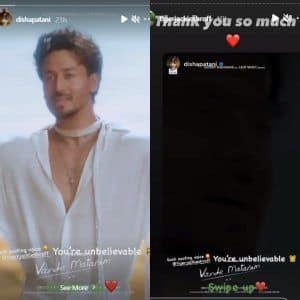 Vande Mataram - the reprised version has been sung by Tiger himself and the song has been directed by Remo D’souza. The song is composed by Vishal Mishra and presented by Jackky Bhagnani’s Jjust Music. In the music video, there are visuals of Prime Minister Narendra Modi at the Amar Jawan Jyoti, Delhi. Also Read - Happy Birthday, Jubin Nautiyal: Check out the 5 most melodious tracks of the popular singer on his special day – watch video

On the work front, Disha and Tiger have worked together in Baaghi 2 and a romantic song, Befikra. The two are often spotted at several events, but they have always remained tight-lipped about their relationship. Both Tiger and Disha give major love goals to many with their social media PDA.