Bollywood actress Tara Sutaria recently shared a picture from the sets of her upcoming film. She informed her fans that she has already started shooting for Ek Villain Returns. The actress shared a BTS picture from the sets of the movie and announced it on social media. Also Read - Athiya Shetty chills with rumoured BF KL Rahul in England and these pictures are absolutely unmissable – take a look

In the picture, the director of the film, Mohit Suri can be seen with a mask on his face. And in front of him is a clapperboard that has Ek Villain Returns written on it. Tara captioned the post as, "Villain Mode On! #EkVillainReturns shoot resumes." Also Read - Aashiqui 3: Has Suniel Shetty's son Ahan bagged the romantic drama even before his debut film Tadap hits the theatres?

Take a look at it: Also Read - After doing 12 movies with Suniel Shetty, Akshay Kumar to team up with the former's son, Ahan Shetty – deets inside 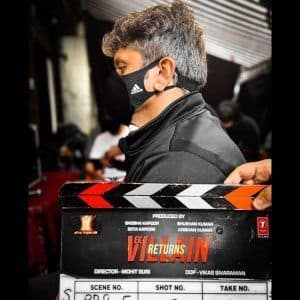 Reportedly, Tara will get to sing a song in the film. The movie is jointly produced by Bhushan Kumar's T-Series and Ekta Kapoor's Balaji Telefilms. Ek Villain Returns is the sequel of the 2014 Bollywood film Ek Villain which featured Sidharth Malhotra, Shraddha Kapoor, and Riteish Deshmukh in the lead roles.

Apart from Ek Villain Returns, Tara will be next seen in Tadap with Sunil Shetty's son Ahan Shetty.