Gauahar Khan gets teary-eyed remembering her late father; says 'You’re in a better place than this slanderous world'

Bollywood actress Gauahar Khan on Wednesday penned an emotional note while remembering her father, who passed earlier this month. The actress took to her Instagram stories and shared a picture of her father from his younger days. Gauahar wrote, “I miss you, papa. But you are in a better place than this slanderous world. May Allah keep you in love and truth.” Also Read - Bigg Boss 15: Tejasswi Prakash OFFENDED with Rakhi Sawant's husband Ritesh as he takes a dig at her kissing Karan Kundrra; fans find his comment 'below the belt' – read tweets 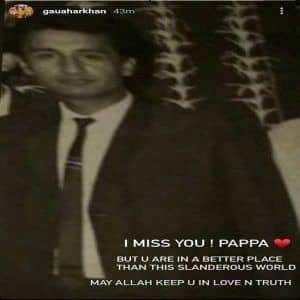 The petite actress was booked for not obeying the coronavirus guidelines by Brihanmumbai Municipal Corporation (BMC). On Monday, the BMC lodged an FIR against the actress for going out and shooting for a film despite testing positive for COVID-19. Also Read - Bigg Boss 15: Rakhi Sawant's EXPRESSION is unmissable as husband Ritesh confesses his feelings for Shamita Shetty; fans say 'bachalo iss pati patni se' – read tweets

Later, the Federation of Western India Cine Employees (FWICE) condemn the actress and issued a non-cooperative directive against her. Gauahar's team responded to all the allegations laid on her and mentioned that she tested negative in multiple reports and hence went out for shoots. They even said that Gauahar is a law-abiding citizen”.

On the work front, Gauahar Khan has appeared in several films including Rocket Singh: Salesman of the Year, Ishaqzaade, Fever and Begum Jaan. She also participated in many reality shows like Jhalak Dikhhla Jaa Season 3, Bigg Boss Season 7 and Bigg Boss 14. She played an important role in Tandav.