Laal Singh Chadha is the most awaited film and stars Kareena Kapoor Khan and Aamir Khan in lead roles.

Laal Singh Chadha is the most awaited film and stars Kareena Kapoor Khan and Aamir Khan in lead roles. The film is the official remake of Tom Hanks' Hollywood blockbuster Forrest Gump. Kareena and Aamir have reunited after working together in 3 idiots and Talaash. Recently, the Begum of Nawab spoke her heart out on working with Aamir in their upcoming film Laal Singh Chaddha and shared her memorable experiences. Also Read - Happy Birthday Rajkumar Hirani: Five most-awaited film announcements starring Shah Rukh Khan, Ranbir Kapoor and more stars that fans are eagerly waiting for

In an interview with PTI, Kareena said, 'I'm extremely excited as Aamir and I are coming together after '3 Idiots' and 'Talaash'. It's very special and we have worked very hard. Especially, Aamir, he has gone through a lot. It's a brilliant script and I'm hoping it will come on the screen the same way and everyone is going to like it'. Also Read - THIS mashup video of Netflix's Squid Game and 3 Idiots will make you go ROFL – watch 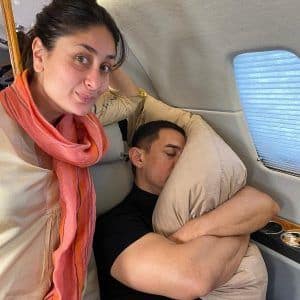 Also Read - #BLRecommends: Kota Factory 2 and more movies and series based on student life that you can stream now on ZEE5, Netflix, Amazon Prime Video and more

The entire team of Laal Singh Chadha wrapped the film last month. Kareena revealed how shooting amid the coronavirus pandemic was a new experience for her. 'We finished my portions during the COVID wave in Delhi. That was the first time I went on a set amid the pandemic and we followed all the protocols', said Kareena. She further added saying, 'It gave me the confidence that I can actually do really well when shooting films with fewer people'. Kareena was five months pregnant with her second child Jeh when she was shooting major parts in the film.

Laal Singh Chadha is backed by Aamir Khan Productions, Viacom18 Studios, and Paramount Pictures. Advait Chandan has directed the movie. The film is scheduled to be released on Valentine's Day next year. Apart from Aamir and Kareena, the film also stars Naga Chaitanya and Mona Singh in significant roles.