Recently, Shweta Tiwari and Palak were seen grooving to 'Bijlee Bijlee' song at a bash party for the song.

Shweta Tiwari's daughter Palak Tiwari is all set to make her Bollywood debut soon with 'Rosie: The Saffron Chapter'. The star kid recently grabbed a lot of attention with her chart-topping song 'Bijlee Bijlee' which was sung by Harrdy Sandhu. Palak has always managed to turn heads with her impressive styling and fashion sense. Recently, Shweta and Palak both were seen grooving to 'Bijlee Bijlee' song. Also Read - Palak Tiwari is a ray of sunshine as she poses in a red Cinderella dress [View Pics]

The mother-daughter duo made an appearance at the success bash for the song. But it seems as netizens were quite upset with Palak's bold outfit. Shweta donned a white top and black jacket, while her daughter Palak wore a black strappy cutout sheer dress. She completed her look with light makeup and left her tresses open. Also Read - Ira Khan, Palak Tiwari, Janhvi Kapoor and more star kids who set the sun on fire with their bikini looks

Within no time, netizens trolled Palak for dancing in the bold dress and filled the comments section with their opinions. One user wrote, 'chhi chhi', while the other wrote, 'ghatiya dress'. Another user wrote, 'kuch sharam h ki nahi'. Also Read - Ira Khan in bikini, Sara Tendulkar in desi attire and more star kids who went viral this week 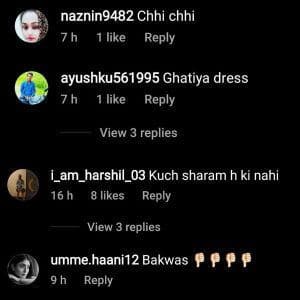 On the work front, Palak's debut film will be released on January 14 of the next year in theatres. The actress will be seen essaying the lead role of Rosie in the film.