Bollywood actor Tiger Shroff had surprised his fans with Ganapath: Part one announcement. This action thriller is one of the most awaited films of Tiger which will also feature Kriti Sanon in the lead role.

Bollywood actor Tiger Shroff had surprised his fans with Ganapath: Part one announcement. He took to his social media and wrote, "Uski hategi to sabki fategi. Aarela hai #Ganapath, taiyyar rehna! #Ganapath in cinemas on December 23, 2022 (sic)." This action thriller is one of the most awaited films of Tiger which will also feature Kriti Sanon in the lead role. Fans will get a chance to witness Tiger performing some breathtaking action sequences in the upcoming film. The actor had already begun shooting for the movie in the UK over a month ago. Tiger has been working quite hard for Ganapath: Part 1 and has been sharing pictures and videos on social media from his shoot. According to the reports, Tiger has got injured while shooting for Ganapath: Part 1. Also Read - Trending Entertainment News today: Shah Rukh Khan's Pathaan look revealed, Sara Ali Khan calls Salman Khan 'uncle' and more

Yes, the Student of The Year 2 actor recently suffered an eye injury while shooting and he shared a picture on his social media. In the picture, Tiger is seen having a swollen eye and a black and blue mark around his eye. He had captioned the snap as “Shit happens.. #Ganapath final countdownnn”. Also Read - Rakul Preet Singh's sizzling hot dance on Pasoori gets a flirtatious comment from beau Jackky Bhagnani [Watch Video] 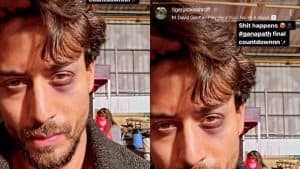 Apart from Tiger and Kriti, the movie will also have Elli Avram in the prominent role. If reports are to be believed then Bollywood legendary actor Amitabh Bachchan has been approached to play the role of Tiger's father. The actor will be seen essaying the role of a boxer in the movie and his father’s character will be shown as a yesteryear boxer. The megastar is yet to decide.

The film is directed by Vikas Bahl and is produced by Jackky Bhagnani of Pooja Entertainment in association with Good Co. Both Tiger and Kriti made their Bollywood debut together with Heropanti in 2014 and this is their second collaboration.