While Shah Rukh Khan fans are excited about the superstar's line up of films, his haters and trollers are having a great time making fun of his latest collaboration.

After long, Shah Rukh Khan fans some very interesting things to look forward to. He has YRF’s actioner Pathan, Atlee’s high-octane heist drama and now he is on board Rajkumar Hirani’s next which is a film based on immigration issues and ‘Donkey Flight’ – the illegal backdoor route used by Indians to emigrate to countries like Canada and USA. According to reports, the film will highlight how rampantly thousands of young Indians get on board the Donkey Flight, use illegal means, to get to the country of their dreams. Also Read - 3 Idiots, Jolly LLB, OMG, Badhaai Ho and more – 10 Bollywood social comedies to catch up on before Helmet hits ZEE5

However, the film will be typical Hirani style, with lots of emotional as well as light-hearted moments. The film is set to go on floors in May 2022 and while there is no confirmation. Taapsee Pannu is said to be zeroed in to play the female lead opposite Shah Rukh. Also Read - 6 evergreen movies starring Shah Rukh Khan, Salman Khan, Hrithik Roshan, Aamir Khan, Akshay Kumar, Ajay Devgn that fans can never tire of watching

Obviously, Shah Rukh fans are making merry about yet another interesting project up his sleeve, especially after the long wait post the debacle of Zero. But SRK haters, memers and trollers across social media have been having a field day ever since this announcement came our way. A meme in particular that has been going viral says a lot about what the junta thinks about Shah Rukh’s recent film choices. This meme which is being widely shared across social media, shows how Shah Rukh has been responsible for giving some of the best filmmakers in the industry, the biggest FLOPS of their careers. Names like YRF (Jab Tak Hai Jaan-2012), Maneesh Sharma (Fan-2016), Rahul Dholakia (Raees-2017), Imtiaz Ali (Jab Harry Met Sejal-2017), Aanand L Rai (Zero-2018) are on the list. The meme further suggests that now, it is Rajkumar Hirani’s turn to taste failure since he is collaborating with Shah Rukh Khan after delivering blockbusters like 3 Idiots, PK, Sanju, Munna Bhai MBBS, Lage Raho Munna Bhai. Take a look at the meme below. Also Read - KBC 13: Here's how a young scientist Gyaan Raj found inspiration from Aamir Khan's iconic character Rancho from 3 Idiots 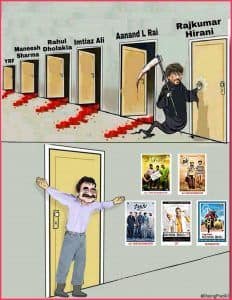 Meanwhile, there are reports that the script for the said film is ready and Rajkumar Hirani is all set to start shooting but waiting for Shah Rukh to wrap Pathan and Atlee’s untitled film before he sets foot on the sets of Hirani’s film.