Shah Rukh Khan's son Aryan Khan's pic from his graduation ceremony takes the internet by storm; is the star kid ready for his debut?

In the last decade, we have seen star kids ruling the internet by showing their achievements and hidden talents. While many of them have already became rockstars on social media, Shah Rukh Khan's elder son Aryan Khan has grabbed our eye-balls with his new pic from graduation ceremony. The star kid, who graduated in 2020 from USC, is seen in a graduation robe with a caption, “Aryan Shah Rukh Khan. Class of 2020. Bachelor of fine arts, cinematic arts, film and television production school of cinematic arts." Unlike father, Aryan Khan doesn't want to become an actor as his dream is to roll the project behind the camera as a director. Also Read - Father's Day 2021: Shah Rukh Khan-Aryan Khan, Saif Ali Khan-Ibrahim Ali Khan more: Here are the most stylish father-son duos of B-Town 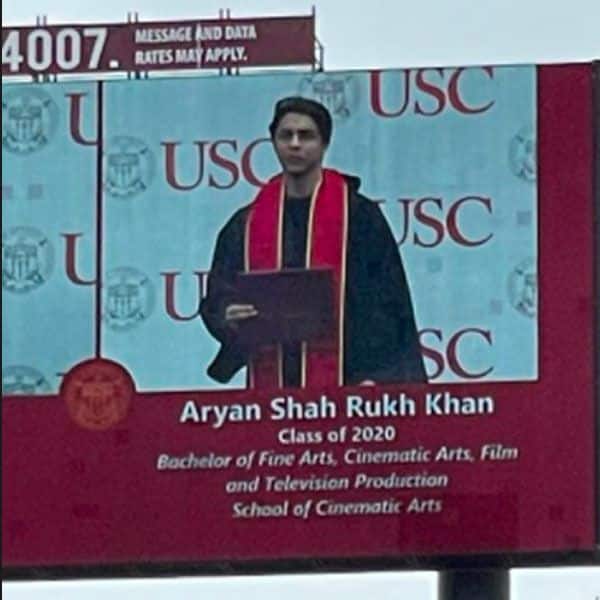 Also Read - Happy Father's Day: From a swanky SUV to a lavish dream holiday home in Dubai – here are the most expensive gifts received by Taimur Ali Khan and other star kids from their superstar dads

While fans are waiting for SRK's comeback with Pathan, the megastar had shared an interesting conversation between him and Aryan on his 54th birthday during a fan event and said, "Aryan told me something very interesting a few days ago, which has stayed with me. So, basically, he walked up to one day and said, 'Dad, you know how while growing up we (Suhana and Aryan) saw films like Baazigar and Kuch Kuch Hota Hai, and they stuck with us, and they told us how big a star you are." Also Read - Happy Birthday, AbRam Khan 7 UNSEEN pictures of Shah Rukh Khan and Gauri Khan’s youngest kid that will make your heart gush

He also said that he knows that in the last few years, he has not done something but will definitely go all out in his next film for his youngest son AbRam. "'Well, it has been 6-7 years since you've done a great film like that, and AbRam, too, needs his Baazigar or Kuch Kuch Hota Hai to grow up with, so that, he, too, knows how big a star you are. Otherwise, he'll grow up wondering why everyone thinks you're such a big star because he won't have the films for himself to look up to. It's been so long since you've given a great film like that. You need to do a big, great film soon, Dad.' This really stuck with me and got me thinking that it's high time I did a really good film like those so that AbRam also knows the kind of stuff people love me for; y'all (gesturing toward the media and fans) love me for."