Bigg Boss 13 winner Sidharth Shukla's death news came as a shock to everyone.

On September 2, the film industry lost a gem. Bigg Boss 13 winner Sidharth Shukla's death news came as a shock to everyone. Right from Bollywood, TV celebs to his fans everyone mourned the death of the late actor. #SidNaaz fans could not come to terms that Sidharth Shukla is no more. The actor rose to fame with Balika Vadhu and gained a lot of popularity post his Bigg Boss win. The actor breathed his last allegedly after suffering a heart attack. Also Read - Balika Vadhu actress Avika Gor romances the sun, sea and sand in a bikini on a beach – watch video

Several pictures, videos, clips, and much more of the late actor have gone viral on social media. Sidharth's fans are making him trend on social media and are expressing their emotions. Well, one such tweet of Sidharth has gone viral wherein he talked about death. Sidharth's tweet from 2017 has grabbed everyone's attention and his fans are totally devastated. In his tweet, Sidharth wrote, "Death is not the greatest loss in life. The greatest loss is what dies inside of us while we live......" Also Read - Late Sidharth Shukla’s lookalike Chandan Wilfreen opens up about getting trolled for making money out of actor's demise 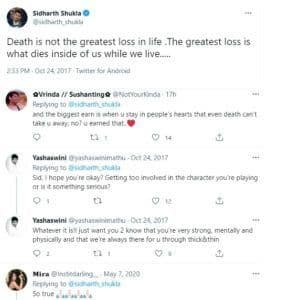 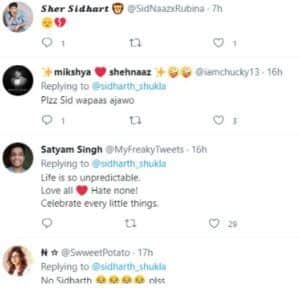 Post his demise, his fans have strongly reacted to his tweet. A social media user commented on Sidharth's tweet and said, "And the biggest earn is when u stay in people's heart even when death can't take you away, no? u earned that," while the other said, "You are here, I won't believe anything. Missing you."

#SidNaaz fans are quite worried about his rumoured girlfriend Shehnaaz Gill who appeared on Bigg Boss OTT along with him. Shehnaaz's father Santokh Singh Sukh said that his daughter is not fine and also revealed that heartbroken Shehnaaz told him over a phone call, "Mere haathon mein woh is duniya ko chhodkar gaya. Ab main kya karungi kaise jeeyungi?"