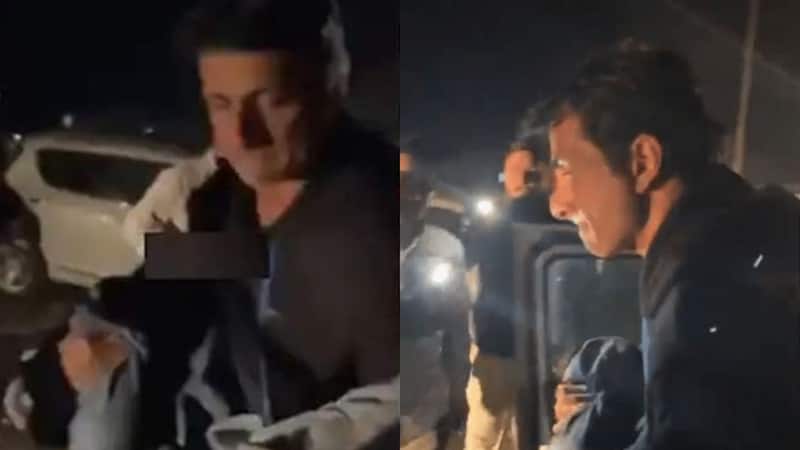 Bollywood star Sonu Sood recently helped a road accident victim and was seen carrying him in his arms. The video of Sonu Sood helping the 19-year-old boy and taking him to the hospital went viral on the internet. On Wednesday, a video has been shared online by his Sonu Sood Foundation and fans are calling him the 'real life hero'. The video shared was captioned as, “Every Life Counts.” In the video, Sonu was seen unlocking the doors of a car as he pulled out an unconscious 19-year-old young boy. The road accident happened at the flyover where Sonu Sood was travelling. As soon as the actor saw the accident, he immediately stepped out and rescued the young boy. The actor picked up the boy and took him to the nearest hospital in his own car. Reportedly, the doctors stated that had the actor not been there for the boy's help, the accident could have proved fatal for him. Also Read - Happy birthday Sonu Sood: Here's how the Simmba actor helped those in need and became National hero of 2020

Check the video here: Also Read - Sonu Sood birthday: From engineering student to struggling actor to messiah – how the actor turned from a reel villian to real hero

In the next clips which are from the hospital, the boy was seen lying on a stretcher with blood on his torso. Sonu Sood’s fans bombarded the comments section and showered his immense love. One user wrote, 'real-life hero', while the other commented, 'Our Superman.' 'Yaar ye sach mee bahut achhe ensaan h', said another user. A user wrote, 'It is needed in today's world that everyone help others like you', while another wrote, 'Till I'm alive I will keep believing that this man Sonu Sood is a living Savior for mankind. My prayers for you always Sir. God's blessings for you abundantly'. Also Read - Happy birthday Sonu Sood: Simmba actor is unrecognisable in this THROWBACK PIC from 1997 before becoming an actor; will make your JAW DROP

On the work front, Sonu will soon be seen on the next season of Roadies and has replaced Rannvijay Singha. The actor posted a video on Instagram and announced about his new role. "I am going to host the new season of Roadies. I am really excited because there is going to be a lot of fun, adventure on the show. This season will have the best roadies in the country. And I am thinking of having some samosas before leaving for South Africa just in case I may or may not get chaat-samosa there", said Sonu.