Aryan's sister Suhana was also in a celebratory mode after the release of her brother.

Bollywood actor Shah Rukh Khan's son Aryan Khan was granted bail in a drug case after he was arrested by the NCB officials on October 3 along with 20 other accused. The star kid was released on bail after he spent 25 days in custody. Post Aryan's release from Arthur road jail, his family was beaming with joy and celebrated his return. Also Read - 'Stop it dad!' Arbaaz Merchant facepalms as his father forces him to pose outside NCB office; paps can't stop laughing – watch video

Aryan's sister Suhana was also in a celebratory mode after the release of her brother. A day after Aryan returned to Mannat, a series of happy pictures of Suhana with her gang from a Halloween party went viral on social media. In the snaps, Suhana was seen enjoying with her friends and was smiling. Sporting a blue halter-neck top and make-up, Suhana was seen hugging her friends in the picture. Also Read - Shah Rukh Khan to attend Katrina Kaif – Vicky Kaushal’s wedding in Rajasthan? 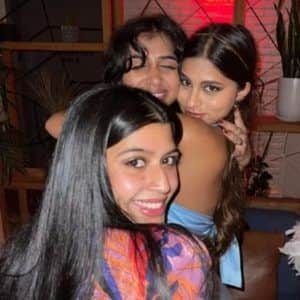 After Aryan was granted bail by the Bombay High Court on October 28, sister Suhana took to Instagram and cheered for her elder brother. She shared a series of black and white pictures of SRK with Aryan and Suhana. She had captioned the post, "I love you."

After Aryan's arrest, Suhana had taken a break from social media, but now the star kid is back. Suhana is currently pursuing a film course in New York and is away from her family. There are reports that Suhana is planning to meet her family and celebrate Diwali with them.