The Gulabo Sitabo actor, Amitabh Bachchan's comment on Kriti Sanon's post, apparently, did not sit well with the trolls. They have been making memes and trolling the actor on various social media platforms.

Kriti Sanon and Amitabh Bachchan have grabbed headlines for one of the strangest reasons. It is just a matter of comment. So, Kriti Sanon shared a couple of stunning pictures on her Instagram. And loads of celebrities reacted to the same, dropping heart emoticons and complimenting the Heropanti actress for her gorgeous and HOT looks. One comment from the post has grabbed the attention of the meme makers. Amitabh Bachchan happened to comment "wow," alongside a red heart emoticon. The comment is now going viral on social media. Apparently, trolls have found new meme material and have been making memes on the veteran actor's comment on Kriti Sanon's post. First things first have a dekko at Kriti Sanon's post and Amitabh Bachchan's comment on it here: Also Read - Before Rahul Vaidya, THESE 9 Bollywood celebs received death threats for SHOCKING reasons 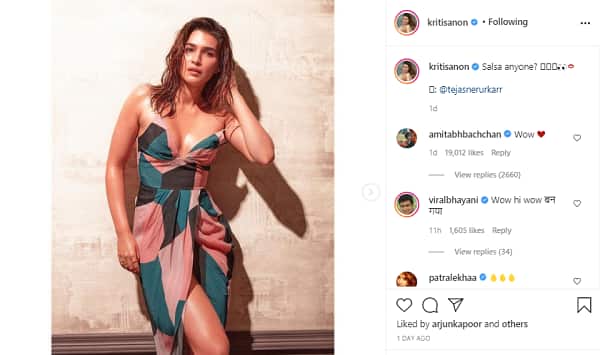 Now, if you like a picture, what's wrong with expressing the same? The Gulabo Sitabo actor's comment apparently did not sit well with the trolls. They have been making memes and trolling the actor on various social media platforms. You can check out the comments on Kriti Sanon's post. Meanwhile, have a dekko at their tweets here: Also Read - Amitabh Bachchan's Gulabo Sitabo co-star Farrukh Jaffar passes away at the age of 89

On the work front, Amitabh Bachchan has Ayan Mukerji's Brahmastra starring Alia Bhatt, Ranbir Kapoor, Nagarjuna Akkineni to name a few. He has Mayday, Aankhen 2, Ponniyin Selvan, Jhund, to name a few. Kriti Sanon, on the other hand, has loads of Bollywood movies in her kitty as well. She will be next seen in Mimi in which she plays a pregnant woman. She has Bhediya with Varun Dhawan, Bachchan Pandey with Akshay Kumar, Adipurush with Prabhas, Sunny Singh and Saif Ali Khan, Ganapath with Tiger Shroff and Housefull 5 to name a few.

What do you have to say about people trolling Amitabh Bachchan for commenting on Kriti Sanon’s post? Let us know by tweeting @bollywood_life.