When Sana Khan got brutally trolled for her 'awkward' hug with Salman Khan; said 'I am not a psychopath'

Netizens noticed Salman hugging her with a closed-fist and uncomfortable smile. Their awkward hug went viral for days and haters trolled her badly.

Bigg Boss ex-contestant Sana Khan has always been in news and has grabbed headlines for a lot of reasons. Though the actress has now left the showbiz industry post her marriage one of her controversies surrounding Bigg Boss back in 2017 is still remembered. During an award ceremony, Sana Khan bumped into Bigg Boss host Salman Khan on the red carpet. The two greeted each other, but their 'awkward' hug grabbed all the attention. Netizens noticed Salman hugging her with a closed-fist and uncomfortable smile. Their awkward hug went viral for days and haters trolled her badly. Also Read - Salman Khan, Raj Kundra, Ayesha Takia and more – Bollywood and TV celebs who were trolled this week and why

Sana lost her calm for all the negative reactions and trolling. She went on record and said that she knows Salman personally and that he was not at all awkward. She even said that Salman's close fist was just his style of hugging someone and said that she is not a psychopath to hug someone if the person doesn't want to talk to her. Also Read - Did Salman Khan just confirm Dabangg 4? Here's what we know 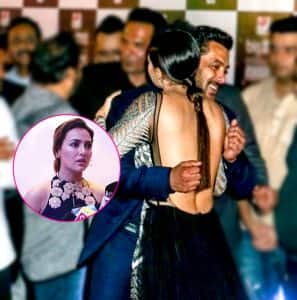 Also Read - Tiger 3: The cost of Emraan Hashmi's entry sequence in Salman Khan starrer is more than a budget of a small Bollywood film?

"I'm not a psychopath to hug somebody if the person doesn’t want to talk to me. I’m not someone who makes people stand and keep talking and falling on their lap. I am on good terms with Salman; we share a rapport, I talk to him on and off, we’ve met so many times, I’ve been to his house, and we have worked together on the sets also. So there’s nothing to feel awkward about", she was quoted saying in her interview with Indianexpress.com.

Salman did not comment on this controversial hug with Sana.